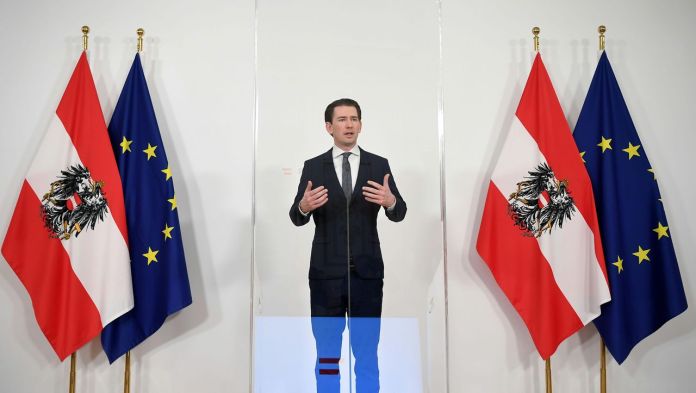 The entire mission is scheduled to take less than 14 hours. Shortly after nine o’clock tomorrow, Thursday, Austria’s Chancellor Sebastian Kurz wants to set course for Tel Aviv aboard a Legacy 500 from the Vienna VIP terminal – and then travel on to Jerusalem. The return to the Austrian capital is planned for 11 p.m.
The weather report predicts rain at a maximum of eleven degrees in Israel. Accordingly, there is little to be said for a disguised pleasure trip to the Mediterranean, for a lockdown escape at the highest government level. But the proverbial short trip is already making headlines for other reasons.

The meeting of the Chancellor and his Danish counterpart Mette Frederiksen with Israeli Prime Minister Benjamin Netanyahu is said to be about a new three-way alliance in the fight against the corona virus. And, unspoken, a slap in the face for the EU’s vaccination strategy, especially for the European Medicines Agency EMA, which is said to be reluctant to approve.

Even the virus of a split in the EU has been conjured up in Europe’s capitals since Kurz and Frederiksen single-handedly announced their intention to tread new paths of vaccine procurement and production alongside Israel that are not coordinated from Brussels.

The reaction of the EU was revealing: one was definitely “interested in learning from Austria, Denmark and Israel,” said a clearly bewildered Commission spokesman. Sebastian Kurz’s communications officers thus recorded a desperately needed point victory in difficult times: Your Chancellor is under pressure due to domestic political affairs and a lack of success in the fight against the corona virus.

Austria wants to »no longer rely on the EU« in the fight against the virus and in future »no longer only wants to be dependent on the EU for the production of second-generation vaccinations” – with these words, the PR strategists from Vienna’s Ballhausplatz intended to sell their initiative.

A short biographer employed by the “Bild” newspaper condensed the sound into an even more catchy formula ahead of time: “Austria’s Chancellor breaks with the EU’s vaccine failures,” was the headline of the mass newspaper on Tuesday night. As a result, the world press, from the Washington Post to international news agencies, got involved in reporting.

By strengthening the centrifugal forces within the EU, Kurz repeatedly weakens its institutions

The question of what exactly the unusual three-party alliance can cause at its turbo summit tomorrow, apart from public attention, faded into the background. The Israeli Prime Minister Netanyahu, currently accused of fraud and corruption, who wants to continue to govern after the elections on March 23, may see the meeting as recognition of Israel’s impressive vaccination rate; the resolute Danish social democrat Mette Frederiksen hopes that she will gain new knowledge in a country that is “absolutely at the forefront of the fight against Covid-19.” But Sebastian Kurz? Is he planning a diversion because public prosecutors are currently tracking down his party friends and those around him at home almost every day with new corruption suspicions?

Not in the slightest, it says in the Chancellery. The trip to the Promised Land is part of a strategy that is intended to make Austria fit for future years with the virus. One tries to “be as prepared as possible for further mutations”. The tried and tested cooperation with Denmark, most recently in Brussels during the EU budget negotiations, but also on migration and pandemic issues, is now being supplemented by a further chapter. “Constructive criticism” of the time-consuming procedure of the approval authority EMA must be possible.

Sebastian Kurz, however, would not be who he is if he only had this one goal in mind, nothing further. By strengthening the centrifugal forces within the EU, Kurz repeatedly weakens its institutions, with arguments that are well worth discussing. So this time too: Isn’t the EU vaccination quota, which is miserable compared to Israel, the USA or Great Britain, reason enough for more initiative? Hasn’t Hungarian Prime Minister Viktor Orbán just been immunized with the Chinese vaccine in front of everyone? Didn’t Slovakia just order two million cans of the Russian substance Sputnik-V?

Briefly “in exploratory talks” with Putin

According to the Chancellery, Austria is currently not only in close contact with Israel, but also “in exploratory talks” with Moscow after a telephone conversation between Kurz and Putin on Friday. Both the import of the Sputnik V vaccine will be considered after approval by the EMA and the production of a vaccine on home soil, at Novartis in Tyrol and at Pfizer in Lower Austria. On the way to the biotech hub in the Alps, however, highly complex systems are required, not just a “filling machine for the fruit growing company”, a TV expert scoffs at the lofty plans of the rulers in Vienna.

The Chancellery on Ballhausplatz is still puzzled as to what is currently going on in Kurz. Why he publicly messes with judicial authorities incriminating his party friends; why he boasts that Austria is “on the way to becoming a test world champion” while the number of infections in the country continues to rise instead of falling; and why he is now starting the journey to Netanyahu in Jerusalem.

The short-term trip to the Israeli head of government, who stands by the Chancellor’s side like a fatherly friend, resembles a liberation, says a political observer: “Kurz and his people have become nervous, they are now totally in a bunker mood.”

Oliver Pocher with an emotional explanation to Ms. Amira

Sanofi buys British Kymab for over a billion dollars initially –... Ski jumping: First podium of the season – Kraft is third...