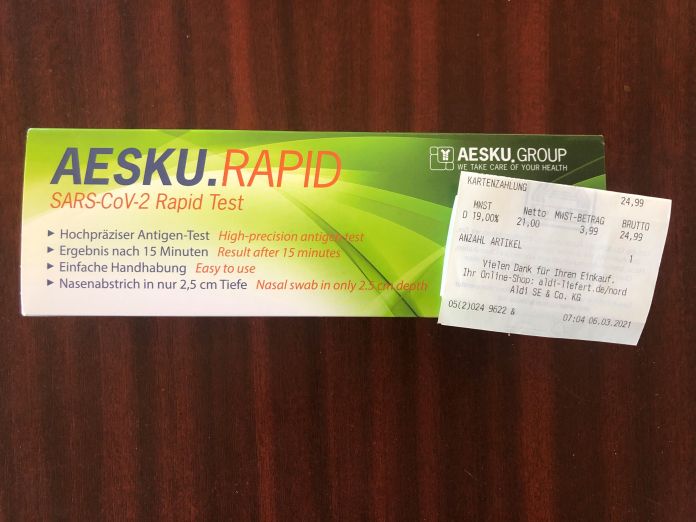 Berlin – As announced, the supermarket chain Aldi started selling corona tests for domestic use on Saturday. The demand is great. In an Aldi-Nord branch in Prenzlauer Berg, the coveted test kits were sold out after just four minutes. The situation was similar in another branch in the Pankow district. It is not clear when there will be more supplies.

Pankow, an Aldi, the sun is just rising. Ten people stand in line with shopping carts. When the door opens punctually at 7 a.m., they slide patiently into the market, most of them turn straight towards the till. And that’s wise, because if you only have one round of bread, you get nothing. The Pankow branch only got a handful of tests for sale. The evening before, an Aldi employee had said to his colleague that he was already dreading Saturday. It is now clear why.

Aldi had already warned in a message: “In order to give as many customers as possible the opportunity to purchase self-tests, the amount sold is initially limited to one pack per customer”. As a precaution, the company asked its customers “to understand if the self-tests are sold out on the first day of the campaign due to the high demand”.

But the fact that it happens so quickly annoys customers. Even the employees had been specially instructed not to buy any tests. In another Pankow branch it was only clear on Friday evening that a mini-delivery was coming at all.

In this branch, too, the 20 tests delivered are sold out within ten minutes. Customers are upset. A couple wanted to buy the tests to be safer when visiting relatives. There is currently no comparable offer, they say. Now they want to visit more shops.

15 minutes before the shop opened, a line formed here when the temperature was below zero. After the shop opened its doors at 7 a.m., almost all customers with empty shopping carts went straight to the two checkouts and bought the coveted tests. A test kit was issued for each purchase. At 7:04 a.m. it was over again, all tests were sold. When a customer asked if and when there would be replenishment, they said they wanted, could, should and will not comment.

The Federal Ministry of Health changed the Medical Device Dispensing Ordinance four weeks ago. This means that since February 2, 2021, self-tests can also be sold in drugstores, retailers or discounters. The self-test sold at Aldi is the Aesku.Rapid product. According to the package, the SARS-CoV-2 Rapid Test should be a “high-precision antigen test” that should deliver a result after just 15 minutes. The handling is “easy”, for a test result “a nasal swab of only 2.5 centimeters” is necessary.

Transparency notice: The owner of the Berliner Verlag, Holger Friedrich, is a member of the supervisory board of the Rostock company Centogene, a rare disease company.

Do you still know? When VfB Stuttgart was sensationally German...

All information about the new UEFA Europa Conference League

FC Bayern Munich in crisis after the DFB Cup at Holstein...