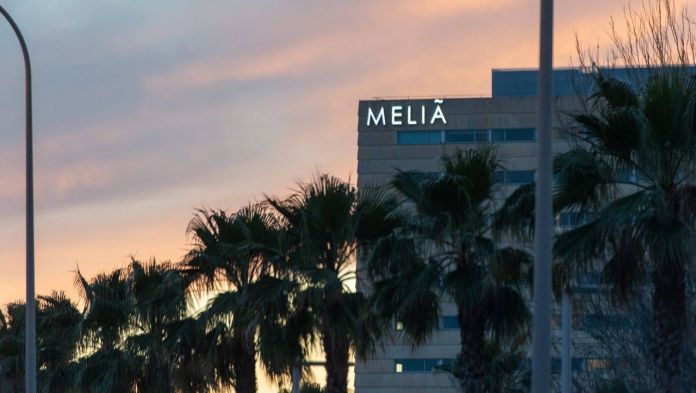 Day one of the compulsory test for those returning home from Mallorca. And even before the new entry regulation came into force, the corona tests were positive for two Germans. They had to go into quarantine at the Meliá Palma Bay hotel on Monday. A spokeswoman for the Balearic Ministry of Health confirmed a corresponding message, as reported by the Mallorca newspaper.

The conference hotel of the Spanish Melía chain near the airport was converted for Covid 19 patients at the beginning of the corona pandemic and initially served as a makeshift hospital. On April 1, 2020, the manager announced on Twitter that it was “the first medical hotel in the Balearic Islands” to go into operation. Two weeks later, illuminated rooms formed a huge heart on the facade – an action out of solidarity with all doctors and institutions that care for Covid 19 patients.

The Melía Palma Bay has been used as quarantine accommodation since June. Not only the two Germans, about whom no further information is known, are currently accommodated in the conference hotel. Majorcans and a Croatian family are also quarantined there. They showed only mild or no Covid-19 symptoms, the newspaper reports, but they are not allowed to leave their rooms. In addition, doctors or nursing staff, for example, whose relatives belong to risk groups, can live there.

The Meliá Palma Bay and another hotel on Playa de Palma are the only hotels in Mallorca where the health authority accommodates quarantine and Covid-19 cases. These are people who tested positive in the new test center at the airport or in other facilities. The stay is free, only the European Health Insurance Card (EHIC) has to be presented.

Infected people can also isolate themselves at home, in holiday apartments or in hotels; if in doubt, this has to be paid for themselves – if the costs are not covered by the tour operator.

Recommended editorial content
At this point you will find external content that supplements the article. You can display it and hide it again with one click.

TUI and DER Touristik, for example, offer their customers tests in their hotels, the latter through mobile test teams. If the hotel has special Covid-19 quarantine rooms, guests can stay there in the event of an infection, DER Touristik spokeswoman Angela de Sando told SPIEGEL. “If that is not the case or if the test is only carried out at the airport, they will be taken to an official quarantine hotel.” At TUI, tourists can be isolated in extra rooms in their hotels, TUI spokesman Aage Dünhaupt told SPIEGEL.

40,000 German vacationers at Easter on Mallorca

On Tuesday, 25 flights to Germany were on the program at Palma airport. In front of the airport test center, which is quite inconspicuous in the departure area and has been in operation since last week, there was still only a small queue in the morning. A maximum of ten returnees were waiting there at the same time. Since the website of the provider Eurofins Megalab had collapsed in view of the large crowd in the days before, chaos was feared on the first day at the airport. The »Mallorca Zeitung« had initially reported on booked out dates and a bulky booking system.

Other passengers had been tested in private clinics before the day of departure. Sometimes not without problems: “Now they have printed out the test result for me in Spanish, and the airline does not accept it,” said an older man, slightly annoyed, to the German press agency. He and his wife did not get the result of the test they took on Monday on their cell phones. »We have never had such a wonderful Mallorca vacation before. We are more afraid of infection now that we are going back to Germany. ”

A man from Frankfurt was still not satisfied even after a quick test. »I actually turn off my smartphone on vacation to relax. That was not possible this time. Neither the tour operator nor the airline let me know. I spent two days looking for where to get tested. ”

The big rush to the test centers in Mallorca before the return trip to Germany will not take place until or after Easter. Despite warnings from the federal government, thousands of holidaymakers flew to Mallorca in the past few days. According to industry estimates, there will be around 40,000 visitors from Germany by Easter Monday. At the weekend alone, 129 planes from Germany landed in Palma. According to the Spanish airport operator Aena, 27 more flights from German cities were expected on Tuesday.

The Balearic Islands recently had just under 37 new infections per 100,000 inhabitants within seven days. This value is 135 in Germany. Unlike in Germany, the restaurants on Mallorca are allowed to receive customers outside until 5 p.m.

The two Germans in the »Corona Hotel« Melía Palma Bay will definitely not be among the guests.

Goiginger extended at LASK – Gladbach change 2019 failed due to...

Georgina Fleur in the jungle camp: alarming statement in the run-up...

Sports rights at Amazon: Billion deal for the NFL

Alpine skiing: this is how the World Cup region Cortina d’Ampezzo...