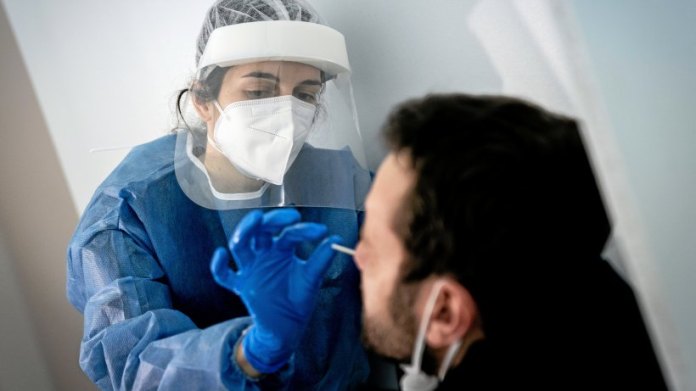 NRW.
Most of the cities and districts in North Rhine-Westphalia, in which the Corona emergency brake would apply from Monday, want to stop them – with voluntary rapid tests.

Most of the cities and districts in NRW with particularly high incidences are turning the return to Lockdown with rapid tests. In big cities like Aachen, Duisburg, Dortmund or Essen and numerous circles are said to be people from Monday upon presentation of a daily negative rapid tests can still go shopping or visit museums by appointment.

At the Emergency brake want to hold onto (and thus also to the withdrawal of opening steps), among other things Cologne. As in Hagen shops and cultural institutions remain closed there.

Corona in NRW: Many cities want to stop the emergency brake

Surprisingly, the country had those independent cities and districts where an emergency brake should actually apply, Exceptions enables: Provided it is enough test options there, appointment shopping, zoo, museum or body-friendly services for citizens with daily tests are allowed.

Most of the 31 counties and cities where the incidence is over 100 for at least three days want to implement this test option. Some of them announced on Saturday that the country had already agreed, including the city region Aachen, Duisburg, Leverkusen, Gelsenkirchen, Wuppertal, Solingen and Herne as well as the circles Herford, Recklinghausen, Minden-Lübbecke, Borken, Kleve and the Oberbergische Kreis.

The Ministry of Health spoke on request of 24 Municipalities, their general directives on the test strategy approved have been. Rejections there weren’t any.

they are Telegram-User? Then you will not miss any more information with our regional news overview of the WAZ. Order here for free!

Corona emergency brake in NRW is intended to motivate testing

Keep the “Emergency brake with test option for better than a pure emergency brake, “said the ministry on Saturday. The test option should be more people motivate, one Test close. “This way we cover Infection trap that would otherwise not have been found, ”it continues.

Many affected cities followed suit: “Rapid tests are now on many decentralized locations are offered throughout the city, the city’s crisis team has therefore decided, in coordination with the state, to use this option, ”explained the city Duisburg.

Dortmunds Mayor Thomas Westphal (SPD) emphasized that the test strategy was no opening strategy, but definitely better than the “half-hearted emergency brake” that the country proposed instead. Testing helps to get a better picture “of the real infection process”.

Many cities in North Rhine-Westphalia apply – some are considering

The circles Euskirchen, Mettmann and the Rhein-Erft district as well as the cities Mülheim, Essen and Bochum had also requested to make use of the new test option. “We guarantee that sufficient test capacities are available,” said Mülheim’s Lord Mayor Marc Buchholz (CDU).

Of the Circle lip wanted to consider the option – it is one of the highest incidence locations in the country at 230. Of the Ennepe-Ruhr district and Remscheid still want to advise on the test option.

Corona emergency brake – This is how the shops in cities and districts open:

Test first, then shop: that’s how it works Bochum the emergency brake

Corona rules: So will Duisburg bypass the emergency brake

District of Mettmann: Shopping in the store is still allowed with a test

Relaxations in the emergency brake also apply to Hattingen

Dealers in Herne may continue to offer “Click & Meet”

Hagen and Cologne return to lockdown

On a Return to lockdown on the other hand, people elsewhere have to adapt: Cologne has announced that it will not submit an application due to the rapidly increasing number of cases.

Also Hagen announced that I did not want to use the test option at first. In view of an incidence of over 200, rely on the “consistent restriction of contacts” – the Emergency brake grab. Shops, museums, cosmetic studios, and zoos will remain closed from Monday.

The number of regions without an emergency brake continues to decline

The number of Regions, in which currently neither emergency brake nor quick test restrictions threaten, continued to decline on Saturday. In total, only 14 of the 53 districts and cities in North Rhine-Westphalia were below the 100 corona incidence. (with dpa)

Our most beautiful boulevard will be Jan-Fedder-Promenade – Hamburg

Amadeus Awards will be postponed until autumn

The market for marine electric vehicles is flourishing worldwide with Boesch...

Talks between Schalke and Rangnick “open and trusting” – to be... Piece of spiral staircase from the Eiffel Tower auctioned for almost...