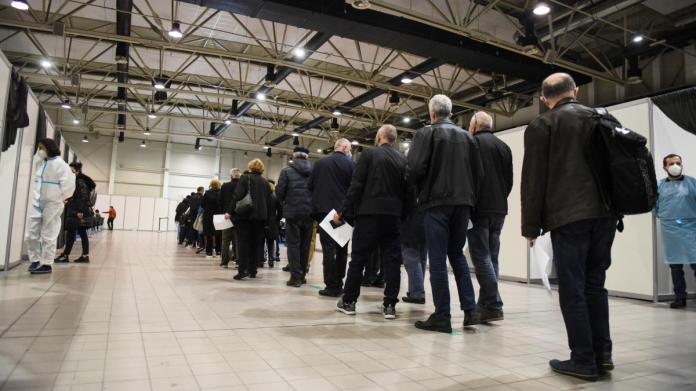 Thousands travel to Serbia for a free vaccination

Serbia is one of the countries with the greatest vaccination successes in Europe. The offer to vaccinate foreigners against Corona free of charge at the weekend met with a great response. There were traffic jams at border crossings.

Serbien has become a magnet for thousands of people who want to be vaccinated from neighboring countries. In front of the largest corona vaccination center in the capital Belgrade, numerous people from Bosnia-Herzegovina, Montenegro and North Macedonia stood in line on Saturday. Often whole families came after the Serbian authorities had declared that foreigners would be vaccinated against Corona free of charge at the weekend. There were traffic jams at border crossings, as the Bosnian news portal Klix reported.

Serbia is one of the countries with the greatest vaccination successes in Europe. It not only uses the funds from Biontech and Pfizer as well as AstraZeneca, but also the Russian Sputnik V and the vaccine from the Chinese manufacturer Sinopharm. Of the country’s seven million people, more than two million have received at least one dose. However, the willingness to vaccinate has decreased significantly in recent times.

Most neighboring countries, on the other hand, have only just started mass vaccination and are struggling with shortages. Serbia has already given away small amounts of vaccine to Bosnia-Herzegovina, Montenegro and North Macedonia.

Critics accuse President Aleksandar Vucic of wanting to exploit the situation politically. In addition, the expiry date for the AstraZeneca vaccine doses in the country is imminent, which is why they must be used up quickly. However, this has not been officially confirmed.

Serbia also started vaccinating migrants on Friday. In a refugee camp near Belgrade, according to the broadcaster RTS, more than 500 people registered for a vaccination with the AstraZeneca vaccine. The Serbian authorities also offered vaccination appointments to people from neighboring countries such as Bosnia and North Macedonia. The UN Refugee Agency welcomed “the inclusion of displaced persons in the national vaccination program”.

Corona update: Kader Loth doesn’t even have the strength to cry!

School board: some exams are dropped | NDR.de – Nachrichten... Competition for eco-party: The Greens are far too soft for these...

Coronavirus in the capital: From today, stricter contact restrictions apply to...