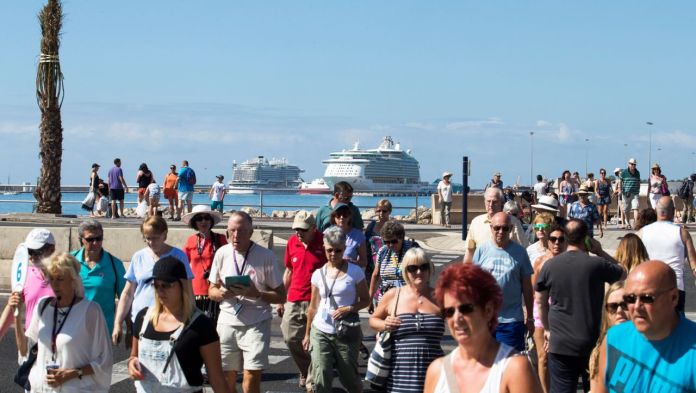 German tourists can currently fly to Mallorca without quarantine or compulsory testing – because: The island is currently not a risk area, the seven-day incidence is below 50. Just as the rules of the Robert Koch Institute and the federal government dictate. Nevertheless, the risk of infection is high, for example for people returning from a trip.
Chancellor Angela Merkel is now considering restrictions on Mallorca travel. At the Prime Minister’s Conference on Wednesday, according to information from participants, Merkel announced that the Ministry of the Interior and the Ministry of Justice should examine restrictions.
However, the legal scope for this is narrow. It would be possible to strive for a renewed transport ban. The federal government had already issued one in December to prevent the new variants of the coronavirus from spreading. It applied to travelers from Great Britain, Northern Ireland and South Africa. Trains, planes, ships and buses were therefore no longer allowed to bring people from the three countries to Germany.

The ban on transport would not apply to German tourists

However, this rule would be an exception for German citizens who want to return. Because it is legally not possible to forbid citizens to return to their homeland. However, it would be possible to introduce conditions that curb the urge to travel, such as mandatory tests before departure and quarantine on return. Formally, these ordinances would have to be adopted by the cabinet.

The federal government and the states had agreed that all travelers who return from abroad will in future take a corona test, even if they come from a non-risk area such as Mallorca at the moment. Airlines had promised to test travelers on the island over Easter before their return trip.

Mallorca currently has an incidence of less than 50 cases per 100,000 inhabitants, the Foreign Office had lifted the travel warning accordingly. This led to a booking boom, but also to heated discussions about whether this would risk new infections. Around 40,000 travelers are expected to return to Germany from there during Easter.

Corona: are the rapid antigen tests coming for the home? ...

Swan blocks the ICE route after the death of other conspecifics

Regular coffee consumption does not lead to poor sleep

The coronavirus situation in the Paderborn district on Wednesday: 131st death...

Only relatives should be allowed to meet at Christmas

Tradwives live the traditional distribution of roles: Then prefer a housewife...