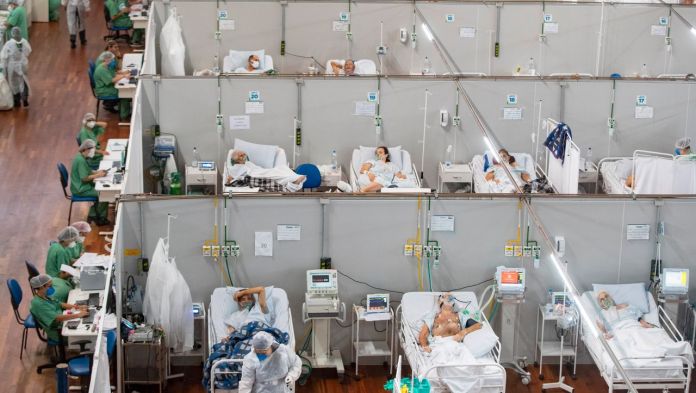 Most recently more than 2,000 deaths a day, around 12 million infected people and a trend in the number of cases that only knows one direction: upwards. Because the corona pandemic in Brazil has got almost completely out of control in recent weeks, the country is increasingly developing into a global epicenter in the virus crisis. While the hospitals in almost all large cities are working to the absolute limit, more and more people are waiting for a free intensive care bed. Brazil ranks second in global case numbers, just behind the US.
P.1 is the name of a particularly aggressive virus mutation that is largely responsible for the devastating situation in the Amazon state. It has now established itself in at least seven states and is also on the rise in neighboring Uruguay. In the meantime, the variant has become at home together with another one, it was said at the beginning of the week from Brazil. However, P.1 has now also been found in at least 25 other countries – and the trend is rising.

The mutant has also arrived in Germany. At the end of January, experts discovered a case in Hessen for the first time by sequencing virus samples. So far, only a few infections are known, according to the last report by the Robert Koch Institute, the proportion of P.1 is still a maximum of one percent of all virus samples sequenced in this country. How the spread will develop is open, however.
P.1 was first detected in Tokyo in January, in four people entering Brazil from the Amazon. Experts assume that the mutation arose there between November and December and goes back to line B.1.1.28 of Sars-CoV-2. In Brazil, the P.2 variant, which developed a little earlier, is also rampant. It seems to be less of a problem and differs significantly from P.1.

According to all that is known, P.1 combines several properties of previous mutations: Apparently, like the British variant, it is up to twice as infectious as the wild type of the virus, infected people have a much higher viral load, which makes them potentially more infectious , and P.1 shows 17 changes in the genome. Ten of them concern the spike protein with which the virus docks on human host cells. In terms of genetic changes, it is also similar to the variant from South Africa (B.1.35) – both carry the mutation called E484K.

Scientists assume for P.1 a reduction in the effectiveness of neutralizing antibodies in recovered and vaccinated people. This means that despite being vaccinated or having had an infection, people could be susceptible to the virus. In laboratory results, researchers have already been able to show that antibodies cannot bind to the virus as well to fight it effectively. A study from Brazil and Great Britain had also shown that P.1 bypasses the immune defense gained from previous infections in 25 to 61 percent of all cases.

The situation in the northwestern Brazilian city of Manaus shows what effects these numbers can have on the course of the pandemic: In the metropolis with a population of millions, there has recently been another large increase in corona cases, although many people there had already been infected with the first wave in the spring of last year. According to a study in the journal Science, the rate was 66 percent at the time, which is why epidemiologists at the time even assumed herd immunity.

If the immunization that has built up due to an infection that has passed through does not reliably protect against infection with P.1, it is also questionable how well the vaccines approved so far work. However, there is still hardly any reliable data available. According to the Brazilian virologist Atila Iamarino, laboratory tests have shown that the vaccines from the Chinese manufacturer Sinovac and the British-Swedish company AstraZeneca could work effectively against the mutation without being adapted. It remains to be seen whether this will be confirmed when used with patients. Other results had shown that the AstraZeneca vaccine was significantly less effective against the South African variant, which is similar to P.1.

A study by researchers at Oxford University, which has not yet been peer-reviewed, at least produced positive results. Accordingly, the vaccines from Biontech and AstraZeneca would work better against P.1 than initially assumed. “The results suggest that P.1 is possibly less resistant to vaccine and immune responses than the South African variant.” The agents would have a similar effect to the British variant.

Another study that has not yet been assessed comes to a different conclusion: Compared to P.1, the effectiveness of the Biontech and Moderna agents is significantly lower.

Approval studies for the Johnson & Johnson compound were also being conducted in South Africa and Brazil when mutations were already emerging there, reports the University of California at San Francisco. That is why there are data that show that the vaccine reliably protects against deaths and serious disease courses. Overall, however, a less strong effectiveness is to be expected than against the wild type.

Even if it turns out that the previous vaccines offer at least some protection, the escalating corona situation in Brazil harbors further dangers: Because the number of infections is high, the virus has many opportunities to change again. Experts fear that a kind of supervirus will develop against which none of the known vaccines could actually help.

Pharmacy complains about “mask tourism” when it is handed over

“Relatively relaxed”: This is how HSV sports director Mutzel thinks about...

The top tournaments of the ATP in the livestream at skysport.de...