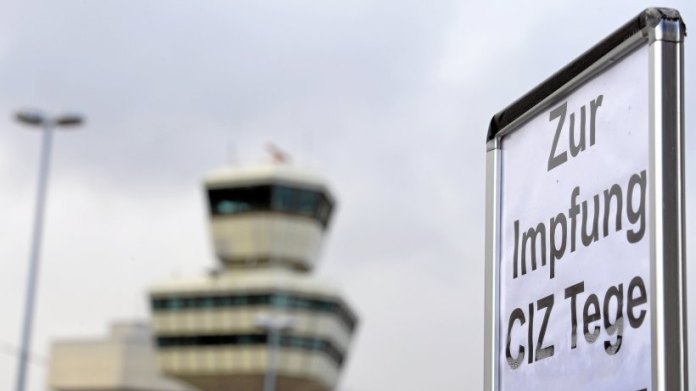 Vaccination Center Tegel will rely on Biontech Pfizer in the future

After Easter there will be a change at the Tegel vaccination center: the vaccine from Biontech-Pfizer will then be used instead of Astrazeneca.

Berlin. The vaccine from Biontech-Pfizer will be used in the vaccination center in Tegel from the week after Easter. Dates for this can already be booked, as the president of the regional association of the German Red Cross (DRK), Mario Czaja, announced on Twitter on Thursday. Vaccinations with it should be possible from Wednesday (April 7th). Until then, the vaccine from the Swedish-British manufacturer Astrazeneca will continue to be used in Terminal C of the former Tegel Airport. Afterwards it will only be used in the vaccination center in Hangar 4 at the former Tempelhof Airport.

The changes in the Berlin vaccination centers at a glance

Astrazeneca: There is a reluctance to have the vaccine

Astrazeneca was initially only approved for people between the ages of 18 and 64 in Germany. The vaccinations with it had also been temporarily suspended in Germany and several other countries in mid-March because several cases of thrombosis (blood clots) in the cerebral veins were reported in relation to the vaccination. Astrazeneca is now being injected again. The Astrazeneca preparation is safe from the point of view of the European Medicines Agency (EMA).

However, there is still a certain reluctance to use the vaccine, as Berlin’s Governing Mayor Michael Müller admitted on Thursday in the House of Representatives. “It is by no means the case that we leave vaccine lying around,” he emphasized at the same time. Berlin has received 163,000 cans of it so far, according to Müller. 54,000 went to hospitals, 34,000 to medical practices, 47,000 were used in vaccination centers.

Liverpool and Man United split goalless at the summit

Leonor of Spain: She is moving to Wales for her education

Groundbreaking research – “Science”: development of corona vaccines Breakthrough of the...

Dieter Bohlen: After DSDS-Aus: “I plan big things, you will hear...