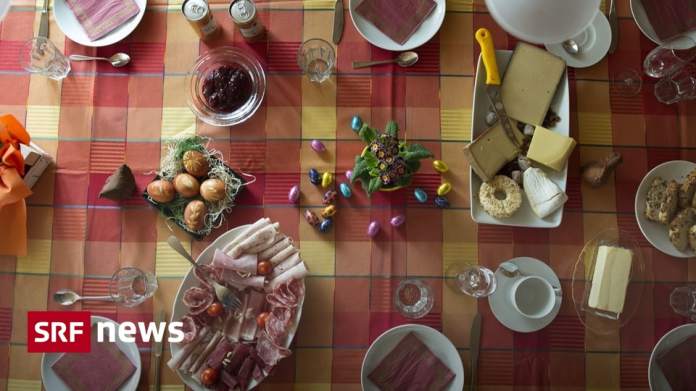 With the recent easing of the Corona measures, the common Easter brunch has been saved for many families. Since Monday, up to ten people have been allowed to meet indoors again. However, the Federal Council has refrained from further easing – because the number of cases is rising again. “The situation remains problematic,” said Federal Councilor Alain Berset in an interview with SRF last week.

The Minister of Health gave no recommendation on how the population should behave at Easter – in contrast to last year, when it was clear and clear: “Stay at home.” Ticino, which was badly affected by the corona pandemic last spring, also warned guests from German-speaking Switzerland not to travel to the southern canton. But this year there are ways to make Easter a little safer together. We summarize.

Since March 15, the costs of tests for asymptomatic people have been covered – provided they are so-called rapid tests. The Federal Council recommends getting tested before joint meetings in order to minimize the risk of corona infection.

Soon there will also be self-tests for the home. These are currently not yet available; the Federal Office of Public Health has announced them for the beginning of April.

The rapid test has a sensitivity of around 80 percent. It is not as accurate as a PCR test, but it is still recommended – also because the virus variant B.1.1.7, which currently makes up the majority of infections, is more contagious. If the corona rapid test is positive, an additional PCR test must be carried out.

So you can only be on the safe side at Easter with a PCR test, which you can still pay for yourself without symptoms. This is recommended if the relatives who belong to a risk group have not yet been vaccinated.

A negative test is only a snapshot. In the worst case, you already have the virus in you, but the virus load is only high enough on the day after the test to result in a new smear. For this reason, too, a quick test on the Saturday before Easter is recommended – if there is a pharmacy nearby that offers one.

The offer is currently rather small: Of the 1,800 pharmacies in Switzerland, only about 280 are currently performing rapid tests, Martine Ruggli, President of Pharma Suisse, told SRF. In the city of Schaffhausen, for example, with a population of 40,000, rapid tests are possible at just two locations. Many pharmacies fail because of the strict requirements of the cantons to even carry out the antigen tests.

In some pharmacies, an appointment must also be made to do a rapid test. «A huge run is expected before Easter. It is an illusion that all people who want to meet can be tested in pharmacies, ”says SRF science editor Christian von Burg. The hope remains that the self-tests for the home will be available before Easter.

Self-quarantine as an alternative

Some already know the principle from last Christmas party: the risk of infecting your loved ones can be reduced by avoiding other meetings seven, better ten days before the family celebration. This will be easier to implement for single people with the option to work from home than for parents with school-age children or people who work in construction.

Last but not least, the well-known protective measures remain: wear masks, keep your distance, wash your hands regularly and ventilate.

Stuttgart a year without a lord mayor? Sunday’s election could...