At the end of February, the European Medicines Agency (EMA) gave the green light for a therapy developed by Roche and Regeneron for use in Covid-19. As current study data show, the decision should have been justified. The antibody cocktail Regn-Cov 2067 reduced hospital admissions and deaths by around 70 percent, as Roche announced on Tuesday. In addition, in the study of around 4,500 test persons, the duration of symptoms was shortened by four days.

In addition, an accompanying Phase II study with Regn-Cov 20145 in non-hospitalized patients with and without symptoms showed a significant reduction in viral load at certain dosages, it said. In addition to these studies, the antibody cocktail of casirivimab and imdevimab is also being investigated in a clinical phase II / III for the treatment of Covid-19 in hospitalized patients and in a phase III for the prevention of the viral disease in household contacts of infected people. The results of the study will now be presented to the US FDA and the EMA.

To date, the Regeneron preparation has been used to treat corona patients who do not yet need an oxygen supply, but who have a high risk of their condition worsening significantly.

Attack on the spike protein

The cocktail is an antibody agent. The body usually forms antibodies against pathogens on its own when an infection occurs. If the virus penetrates, a defense cascade of the immune system starts with these proteins, which are directed against several structures of a pathogen. In the course of the infection, more and more proteins are formed – also in order to be able to react more quickly if the infection occurs again. According to a study published in the journal Science, certain types of antibodies can still be detected in the blood of recovered patients for six to eight months.

For a drug, monoclonal antibodies are produced in the laboratory, all of which arise from a cell clone. However, since this is only one variety, in contrast to naturally occurring protein, they are only directed against specifically targeted parts of a pathogen. In the case of the Covid-19 antibody agents, part of the spike protein is the target. To enable the effect on virus mutations, different monoclonal antibodies are sometimes mixed. With their administration, significant preparatory work is done in the body. The phase in which the virus first has to be recognized in order to set an immune response in motion is more or less skipped and the effect starts immediately.

In view of the increasing number of new infections worldwide, “this antibody cocktail could represent a potentially new form of therapy for high-risk patients,” emphasizes Roche’s chief medical officer Levi Garraway on CNBC. Together with Regeneron, more than two million cans could be produced annually.

The EMA is currently also testing the effectiveness of the antibody agent with Bamlanivimab and Etesemivab from the US pharmaceutical company Eli Lilly. This is done using the accelerated rolling review process. The two preparations are also intended to attack the Sars-CoV-2 spike protein in different places so that the pathogen cannot penetrate into body cells. In combination, it could be more effective than just a single supplement.

Previous study data show that antibody cocktails are particularly effective when used in the first ten days of infection. Incidentally, these preparations are acute drugs and do not protect against further illnesses.

Many districts lock out day-trippers – high fines are imminent 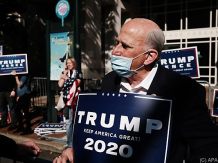 Wieler (RKI) on the corona situation: “It is possible that the...