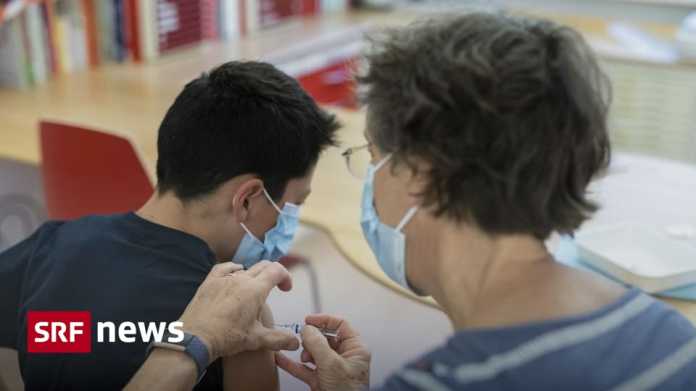 The Covid syringe for children and adolescents is in progress. The study results from age 12 are expected in summer.


Reports from Belgium and Great Britain confirm what teachers report in this country: More and more children and young people are infected with the corona virus. The UK has the highest number of infections among ten to 19 year olds.

It is still unclear how dangerous the British virus variant is for children, explains SRF science editor Christian von Burg. The data is still insufficiently secured, and the experts also assess this differently.

According to von Burg, the increase in confirmed cases among children and adolescents in Switzerland is at least partly due to the fact that younger people are now being tested much more frequently.

However, it is now becoming more important that the so-called “PIM syndrome” can occur in children. It is a very rare but serious inflammatory syndrome that can occur around four to six weeks after a corona infection. Five to 17-year-olds are particularly affected, two-thirds of whom are boys.

High fever, diarrhea, and vomiting such as appendicitis are possible with PIM. Symptoms of shock can also occur and there is a risk of an insufficient supply of oxygen. So far, between 100 and 150 cases have been treated in hospitals in Switzerland. There have been no deaths yet.

It would be good if there were vaccinations for children soon.

One PIM disease in 1000 to 5000 corona infections in children is assumed. In addition, some children also have long-term consequences after a Sars-CoV-2 infection. “It would therefore be good if there was also a vaccination for children soon,” said von Burg.

It is questionable whether herd immunity can even be achieved with Corona, von Burg continues. If this were the case with 80 percent of those vaccinated or infected, all adults would have to be vaccinated. Children and young people alone make up around 20 percent of the population. “If children and adolescents are not also vaccinated, it will be difficult to prevent the virus from circulating further.”

Vaccination for teenagers possible from autumn

A vaccination for adults cannot necessarily be used one-to-one in children, because the latter have a different immune system. Various manufacturers are therefore currently also testing their vaccines on children.

The approval of a vaccination from the age of twelve in autumn seems realistic.

According to von Burg, Pfizer and Moderna assume that the first study results will be available in summer for teenagers from the age of twelve. Approval in autumn seems realistic. For the vaccine for younger children, the tests have only just begun. Approval will probably only come next year.

More side effects in women

According to Swissmedic, a good 860 reports of undesirable side effects have been received in Switzerland so far, a third of them serious. Other countries also report that women in particular are affected by side effects, as SRF science editor Christian von Burg says.

So far, however, there have only been attempts to explain this that have not been scientifically proven: On the one hand, women are more attentive to their body and health. You may notice something earlier and report it sooner. On the other hand, it could also be due to the different immune systems of men and women. Perhaps that is why the latter – similar to the flu vaccines – show a more violent reaction.

ROUNDUP 3: The wave of insolvencies is rolling in fashion retail...

Porsche is now building e-bikes: the design should be reminiscent of...

“Gone with the Wind” now as a radio play from the...

Berlin and Brandenburg celebrate the organ as an instrument in 2021