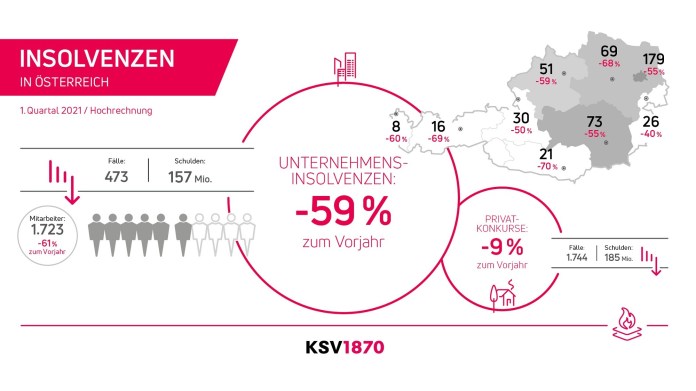 The insolvency figures for Austrian companies are still at a historically low level. According to a current extrapolation from KSV1870, the number of corporate insolvencies in the first quarter of 2021 fell by 59% compared to the same period of the previous year. 473 companies have had to file for bankruptcy since the beginning of the year – the lowest figure calculated per quarter since 1977. The KSV warns of “undifferentiated generosity”.

At the same time, the estimated liabilities have “disproportionately strong” decreased by 86 percent to 157 million euros. This is only a seventh of the previous year’s figure and a consequence of the fact that “there have been only two major insolvencies in 2021 with liabilities of over EUR 10 million,” says the KSV. In the first three months of the year, 1,723 employees were or were affected by an insolvent employer, which is a decrease of 61% compared to 2020. In addition, 3,594 creditors have to deal with the bankruptcy of a business partner.

Since the 1st lockdown in March 2020, company bankruptcies have been reduced by around 50 percent per week. This can also be clearly seen in our insolvency overview. “When there will be a trend reversal is open and also depends on further artificial interventions by the federal government. Due to the latest developments, the KSV1870 expects fewer bankruptcies at the end of the year than originally assumed, ”says a KSV tender.

“Undifferentiated generosity should be stopped”

The corona crisis continues to show its claws. We are in the midst of the biggest economic crisis since World War II and the number of bankruptcies continues to plummet. If this development continues, Austria’s economy will have to struggle with far more massive economic problems in the medium and long term than is already the case today, ”explains Karl-Heinz Götze, Head of KSV1870 Insolvency.

One reason for the precarious situation is, among other things, the numerous artificial interventions in a well-functioning insolvency system, which artificially keeps many companies alive. “This undifferentiated generosity should be stopped before even healthy companies are driven into the downward spiral by financially weak companies,” said Götze. The KSV1870 therefore advocates “an immediate end to the practiced watering can principle” in order not to endanger even more companies.

“Wave of insolvency not recognizable”

But there is also positive news. A “wave of insolvency” is “not recognizable on the horizon from today’s perspective”. However, the extended Corona relief measures on the part of the federal government would make “valid future forecasts” “almost impossible”. Since the beginning of the pandemic, the number of company bankruptcies per week has fallen by around half – this trend is likely to continue in the near future. From today’s perspective, KSV1870 assumes that the number of company bankruptcies will increase “in autumn at the earliest”. Regardless of this, the year as a whole will probably be “significantly lower” than originally expected. It is quite realistic that this will be at the previous year’s level or slightly above it. Götze: “From today’s perspective, there is no sign of a real wave of bankruptcies on the horizon. Whenever the insolvency figures rise, we assume a steady increase in company bankruptcies. This increase will extend into the years 2022 and 2023 ”.

Corona economic crisis: These are the biggest bankruptcies [KW 11]

Earthquake in Croatia – noticeable as far as Germany and Austria

Pelosi calls for impeachment: Trump a “threat” to the country

Weather: Official warnings for all of Germany – will Munich escape...