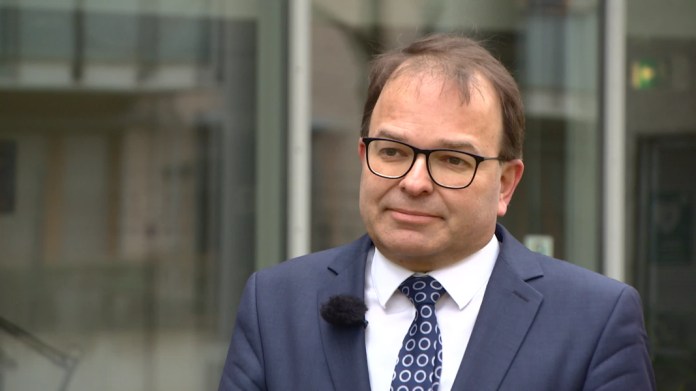 Mr. Roselieb, where are we in the crisis? And can politics still do something that is right?

Frank Roselieb: We have actually reached a very important turning point. In terms of time, the pandemic has slowly passed its peak. Now the time would have come to vaccinate – to give the population back their basic rights and also to declare the pandemic over at some point. This is currently not working because politicians cannot deliver what they had actually promised. For politics, this is a classic lose-lose situation at the present time, also in terms of communication. No matter what she does, she actually does everything wrong.

With regard to what comes from the Prime Minister’s Conference. The lockdown will continue one way or the other – what does that lead to?

Roselieb: The lockdown is now accepted by the people. What they no longer accept is the feeling of inequality. That means they are allowed to fly to Mallorca with an incidence of 20,121 – but the district of Plön is not allowed to open hotels with almost the same incidence. On the one hand, politicians have to try to explain that the Prime Minister cannot touch Mallorca, but can restrict the Plön district. On the other hand, it also means that they have to explain how to solve the problem on the other hand.

It can be done by helping the hoteliers. They have already been announced relatively lavishly, some of which have not flowed. But you can also try to make it clear to the citizens – communicatively – that Mallorca is not a good idea.

Has politics put itself in this situation?

Roselieb: Politicians have promised a lot, but have noticed that they cannot deliver. You have to know that we are pursuing a different strategy in Germany. Usually several instruments are used in crisis management – simply to prevent, if one fails, that the entire crisis management fails. And that has not yet been communicated well enough to the citizens. For example, we didn’t just rely on the vaccine because we know from past pandemics that such a vaccine can break down. We may have a few horses too many in the race. There was the app that was unsuccessful. The test doses are not available in the order of magnitude. The vaccine is somehow not delivered that way. And you have to ask yourself whether fewer instruments would also offer enough options.

Frank Roselieb is a crisis researcher. The Kieler also advises the state government. In the interview he talks about crisis management, among other things. 8 min

Has the mood in Germany changed in society?

Roselieb: We had a relationship that three-quarters actually liked what was being done and one-fourth was against it from the start. You could no longer convince them argumentatively. If you look at the current numbers in the ARD Germany trend, it is now halved. One half says – somehow still works. The other half says – no, no longer runs, stops the measures. And in the mix, politicians must somehow try to come to terms with it. In the end, you have no choice but to say, hold on.

Roselieb: We have the great advantage that at some point nature will come to our aid. In crisis research, we also dealt with the question of how one can actually get out of the pandemic without all these measures. How did our grandfathers deal with the Spanish flu? They just said the virus kept mutating. At some point the virus realizes that there is no point killing its host. So over time, the virus becomes less and less harmful. And this may mean that we can be spared the fourth wave – regardless of how the crisis management continues.

Have we got to a point where we’ve lost control?

Roselieb: So I wouldn’t speak of a loss of control or a failure of politics yet. There have to be further measures, further problems. I think politicians have recognized that they have a problem. She has to start giving up certain resentments. In the 1970s, we had the principle of basically not taking any Russian vaccine for smallpox at that time. That may still be justified at the time. To say today that we won’t take Sputnik Five in with us might be a mistake. It has also been tested outside of Russia. The Chinese vaccine has been successfully introduced and tested in Chile. If you lose that bit of resentment in politics, then maybe you can deliver what you actually promised.

At the last meeting there were easing steps – and that despite the increasing incidence numbers. Was that a mistake that is falling on our feet now?

Roselieb: That would certainly have been a mistake at the beginning of the pandemic. At the beginning you can hit it hard and hit it wrong. The main thing is to get the virus under control. But lawyers say, of course, the longer the pandemic lasts, the more precisely you have to work. And then it would not have been appropriate to close up all of Germany.

Roselieb: If you justify well, you actually have no problem. You know what it is tied to. The incidences can be criticized in many ways, but we simply do not have a better instrument. The behavior of the individual is also important. We now know from all of the pandemic research that the problem is not so much the public domain. The problem is in the private sphere, and that is why there are some measures that are not understood – for example the curfew. It may sound very brutal nowadays, but it is exactly the instrument to get the private sphere under control so that you do not meet other people after 10 p.m.

ICan it be conveyed that one can go to the beautician, but not drink the cappuccino ten meters away?

Roselieb: Politics works with meta criteria. That is, one does not explain in detail why this is right or wrong now. It is generally said that social contacts should be reduced as much as possible. And there you can partly prove why certain things are more dangerous than others. With some things one can only hope that no one will ask. You just have to believe that people understand fundamentally. Reducing contacts also means reducing where it is not necessary at all. We saw that in the hotel sector, where the clusters were adhered to quite well. That means that the employees were infected, the guests in no way. Nevertheless, they are currently not allowed to open. But that also simply serves the goal of reducing contact.

Looking ahead to the next few months: what do you expect and how things will continue?

Roselieb: We know from crisis research that pandemics in Central Europe last around 18 to 20 months on average. It will now be important that politics deliver what they promise. Since she works in the background mainly on vaccination, so that you can quickly replenish it. And from that side I expect that we can actually make extensive vaccination offers in the summer. If politicians are still delivering now, then we should actually be through with the pandemic by autumn.

The interview was conducted by Rafael Czajkowski, NDR Schleswig-Holstein.

On Tuesday from 5 p.m., 60,000 people can register. Questions and answers about the vaccination campaign against Corona in Schleswig-Holstein. more

Winter thunderstorms over Berlin: how does the phenomenon arise?

After the death of a two-year-old: the fifth floor is still...

Implementations for PSVR and SteamVR announced

Reddit boss Huffman and Gamestop: Manager of the Memes – Digital