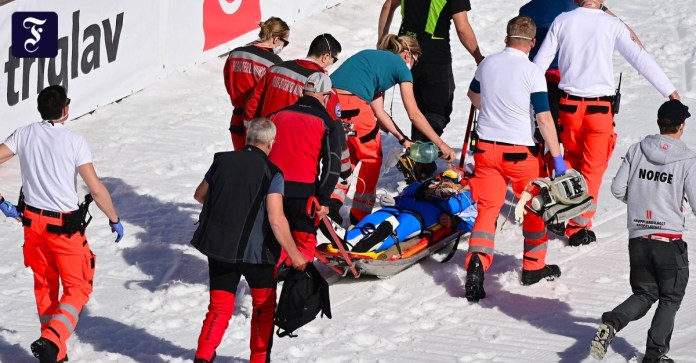 DAniel Andre Tande sailed across the air in an uncontrolled manner, then hit the porch of the ski flying hill in Planica at high speed. Bad pictures of a bad fall overshadowed the first day of competition at the ski jumpers’ big season finale. Tande, who slipped motionlessly down the extremely steep slope after the impact, still had to be provided with emergency care and ventilated at the jump and then taken by helicopter to the hospital in the Slovenian capital Ljubljana.

The health of the 27-year-old Tande was “stable”, the Fis said at first. Only later did it become apparent how dramatic the hours on Thursday afternoon really were. “He had to be intubated and mechanically ventilated,” chief physician Tomislav Mirkovic was quoted as saying in the evening. Tande did not suffer any life-threatening injuries, said sports director Clas Brede Braathen the Norwegian broadcaster NRK. “He has a fracture in his collarbone.” The 27-year-old will definitely be kept in an artificial coma until Friday to relieve his brain.

“This is a bad story”

Germany’s top athlete Karl Geiger, whose third place was a minor matter, looked badly bent: “That is tragic. It’s a bad story. ”In the trial run in which the accident occurred, it was Geiger’s turn right after Tande. “I wanted to know what was going on right away. They said: You don’t yet know whether he will survive, ”said the Allgäu on ZDF, describing the dramatic moments in the run-out. The clinic has since given the all-clear on this point. On Friday afternoon, after further tests, you would know more, it said.

At 78 meters, Tande landed with his body on the porch. The pictures were terrible and they also made an impression in the jumpers’ camp. Geiger demonstratively looked up at the gigantic facility during the interview and said in awe: “You keep forgetting, it’s a giant hill. That is life-threatening. I hope that he is among the living again and that he will not be harmed. “

Markus Eisenbichler, who finished second behind Japan’s winner of the day Ryoyu Kobayashi, added: “Thank God I didn’t see it, otherwise – I think – I wouldn’t have hopped today.” Also national coach Stefan Horngacher immediately said something about the incident The otherwise happy flight show in sunny Planica spoiled: “First of all, it is important that Daniel Andre Tande is doing well. It was really a bad fall. ”Norway’s sports director Brathen praised the first aid on the hill as“ highly professional ”.

Norway’s head coach Alexander Stöckl was also shocked after his protégé fell. “It’s hard to watch a jumper get air under his skis and turn. You can only hope for the best, that everything is okay with him, ”said the Austrian Stöckl.

Immediately after the jump, which his coach Stöckl described as “beautiful and with a lot of energy”, Tande lost his balance and got massively imbalanced. After that, Tande had no chance on the flying hill. He crossed his arms over his chest while he was still flying and tried to avert the worst. The pictures of Tande, who is one of the best fliers in the world as individual world champion in 2018 and team world champion in 2020, were also dismaying for TV viewers.

The serious incident was reminiscent of previous violent falls in the ski jumping scene. The American Nicholas Fairall had to undergo emergency surgery after falling in Bischofshofen in 2015 after sustaining a serious injury to his spine. The Austrian Lukas Müller had a hard time ski flying on the Kulm in 2016 – as a forerunner. The now 29-year-old crashed into the front of the building like a bang, he was diagnosed with incomplete paraplegia.

Bachelorette Melissa explains: did she have a nose job?

Star of Bethlehem – spectacle in the night sky just before...

“Sex and the City” comeback: what are the new rumors saying?...

Samsung SSDs at top prices on Amazon in the Black Friday...

Google shortens the release cycle of its Chrome browser