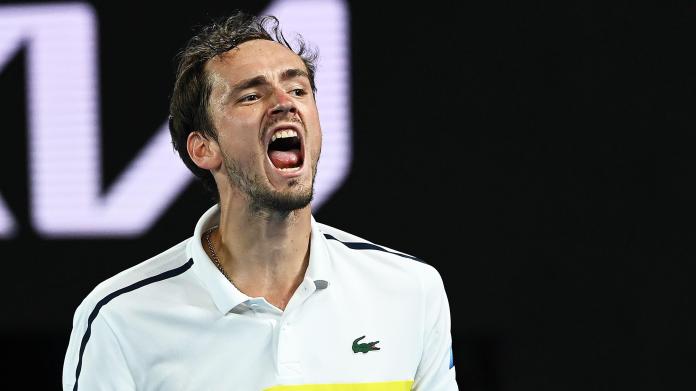 Last Monday was a special day for the two men who have shaped the tennis year 2021 so far: Daniil Medvedev and Novak Djokovic.
The Russian made it to second place in the world rankings, breaking a streak that was almost 16 years old. Since the 2005 season, no player who did not belong to the so-called Big 4 around Djokovic, Roger Federer, Rafael Nadal and Andy Murray has climbed that high in the ranking.
Djokovic, on the other hand, broke the record he had shared with Federer to date with 311 weeks at the top of the world rankings. An end to the Serbian reign is not in sight. “Novak is definitely able to create 400 weeks,” Medvedev said in an interview with the ATP. Not without garnishing the praise with a warning. “We’ll try to stop him.”
ATP Miami, FL

After Federer and Nadal: Djokovic can also cancel the start in Miami

As things stand, it depends primarily on him how long Djokovic will remain at the top. The gap that Medvedev has to make up for in the ranking is 2068 points.

It takes two things to catch up: consistently good results on the tour and, if possible, successes in the Grand Slam tournaments. Medvedev has been able to achieve the former in an impressive manner for a long time; he is still missing a major title.

That should change from now on.

It should be enough if Medvedev remains true to his line. The 25-year-old has long since got everything it takes to win a Grand Slam competition and sooner or later to become number one. “Jim Courier once called us a great chess player because he is so tactically positioned on the pitch. That’s also true, Daniil is a very clever player,” says Djokovic.

Clever – and ingenious. “Like his personality, his game is very multifaceted,” explains Medvedev’s coach Gilles Cervara. One of his jobs is to train a genius. “Sometimes you don’t understand geniuses, that’s the way it is. You have to take them for who they are.”

What Cervara usually succeeds in is difficult for many opponents. Because Medvedev does not only live from his outstanding game. No, he provokes, gesticulates, debates – and then usually wins. Many do not like that.

Medvedev on criticism of opponents: “Doesn’t bother me”

“Some players don’t understand why I am like this. I do bad things on the court every now and then, but they can’t distinguish between my tennis life and normal life,” Medvedev revealed in an exclusive interview with Eurosport last summer . A problem? Not at all. “That’s okay and I don’t mind either.”

The world number two can live well with criticism. “I actually have no idea why the demons come out when I play tennis,” says Medvedev of the part of his nature that blocks his path to becoming the crowd favorite.

In contrast to Djokovic, who has been fighting a difficult battle for the affection of the fans for years, the Russian doesn’t really care how people think of him. That can definitely be an advantage on the way to the top.

Most recently he triumphed at the ATP tournament in Marseille, and the next move is to follow from March 24th at the Masters in Miami. It’s about 1000 ranking points. Medvedev is number one on the seeding list because Djokovic, like Nadal and Federer, will not compete. So there is a lot to gain for the Russian in Florida.
You might also be interested in: The magic is gone – that’s why Thiem is in crisis

Tenth title: Medvedev triumphs in the final in Marseille

Cyclist Federer in low gear: what is this comeback worth?

The magic is gone: That’s why Thiem is in crisis

Mats Hummels defends himself against critics after a draw against Hoffenheim

Number of asylum applications in the EU falls by a third

This is how you can see the “Star of Bethlehem” on...

Be quick with these deals!

Corona – the majority of the sick still have symptoms after...