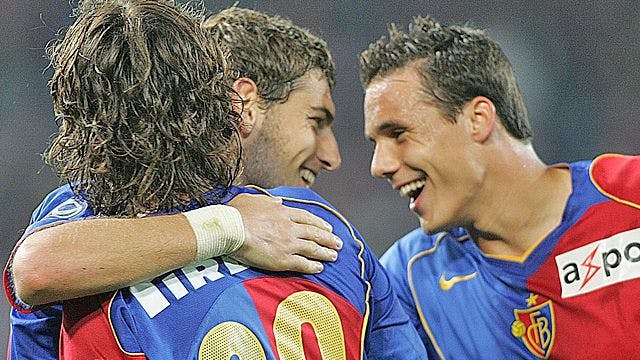 David Degen can look back on a successful career as a player, especially with FC Basel he celebrated great successes. And yet he could not fully realize his potential. Mainly because he always expressed his opinion without make-up and was always offensive.

The fact that Degen is publicizing the power struggle with Burgener does not look professional from the outside. But it fits his nature. Degen has never minced his mouth, that already shaped his career as a player.

Trained at FC Basel, David Degen switched to FC Aarau on loan in 1999 to take his first steps in professional football. One step back to take two steps forward later. A path that many well-advised young players are taking. As a 17-year-old, he made his debut in the top division, but mostly he was not in the first team’s squad. Only in his third season does he feel his way to the team. This is registered in Basel and so he returns to his regular club in December 2003. There he is often used, but only in his third season (2005/06) does he mature into an undisputed regular player and thus makes an important contribution on the way to the championship title and the quarter-finals in the UEFA Cup.

He then prematurely terminates the contract with FC Basel, which expires in the summer of 2007, and the rapier, which has only just matured into a national player, cannot resist the call from abroad. After the 2006 World Cup, in which he was not used, he signed a contract with Borussia Mönchengladbach until 2009 in July 2006.

The then Gladbach coach Jos Luhukay on David Degen

In his ten-minute debut in the Bundesliga on October 14, he was promptly among the top scorers. But he does not want to make the final breakthrough, only five times in the league in the coming months in the starting line-up. Trouble is looming even before the end of the season. Coach Jos Luhukay removes him from the professional squad and parks him in the offspring. The trainer justified it with the words: “I can’t need such a character here.” In an interview with “Transfermarkt” published in 2018, Degen recalls: “The problem was that I was thinking along. I went to the coach’s office and gave my opinion there. I have never pretended to be for any person. “

And so he returned to FC Basel on loan in the summer of 2007. As champion and cup winner, he said goodbye to league rival YB after the loan ended, for whom he played 137 games in four seasons without a title. For the 2012/13 season, Degen is returning to FC Basel again, signing a three-year contract. In the first season he played 45 competitive games across all competitions and at the end of the season he could call himself a four-time Swiss champion. In the Europa League, Basel advance to the semi-finals, but Degen only makes two appearances against Chelsea.

Early retirement after falling out

In 2014 he became Swiss champion for the fifth and last time, but rarely gets a chance in the league. The relationship with coach Murat Yakin has now been badly damaged. After the season, despite a contract, he ended his career until 2015. Amazingly, because Degen is foregoing a lot of money – and because Yakin and FCB had already split up at this point. At the time, Degen explained in the “Tagblatt” that his decision had nothing to do with Yakin. “In professional football you always have to give 100 percent, and 95 percent is not enough. Even a new coach cannot rekindle this fire because I don’t allow myself to be guided by others. “

«
I am grateful because I learned a lot. For example, squatting on your mouth.»

The year demanded a lot from him, but also brought a lot. “I’ll take that with me for my future path in life. I am grateful because I learned a lot. For example, squatting on your mouth. Philipp (twin brother) and I held back a lot, did not give any interviews, although we were constantly being shot at and we had every reason to defend ourselves. “

He is an honest and open person who says straight forward what he thinks. «I never bend. I’m offended by that, which has often got in my way in my career. Because that may be interpreted as arrogance. But everyone who knows Philipp and me knows what makes us tick: We are happy but ambitious guys who have a goal. That is our attitude towards life, ”continued Degen.

David Degen gets entangled in contradictions

There is not much left of the fact that he learned to sit on his mouth, as has been shown especially in the last few days. But this would also be in contrast to his statements, which were made almost in the same breath at the time, that he did not let others guide him and always let his thoughts run free. It is also these contradictions and David Degen’s character traits that make some people doubt whether he is actually the right type to lead FC Basel into calmer waters as a strong man at the top of the club.

The fact that he delivered more goals and assists for YB in 137 games (27/34) than for FC Basel in 208 games (26/24) should be forgiven by the fans, given five championship titles he won with FCB (none with YB) . It should be viewed more critically that he supposedly wanted to join GC after his career. The propagated “Forever Red-Blue” image has at least yellow-black scratches and small grasshopper spots. Nobody will deny that he has “sweated blood and sweat and celebrated great successes” in the FCB shirt. David Degen and FC Basel also have something of a passionate on-off love affair.

survey
Who is the right man for FCB?

The new number one in downhill sports is being sought on...

The new face of the White House

Highest number of corona deaths in the USA

Thousands of ravers defy the police in France

Only six self-tests in one branch: At Aldi in Berlin, the...