Investors on the German stock market reacted again on Thursday to rising bond yields and the sell-off in technology stocks. The latter suffered from profit-taking, as did cyclical stocks. What was in demand, however, were defensive papers.

The Dax temporarily fell below 14,000 points, but recovered in late trading after a friendly opening on Wall Street. Ultimately, the leading German index lost 0.17 percent to 14 056.34 points. The day before, the leading index had reached a record high with almost 14,200 points. The MDax of medium-sized companies lost 0.80 percent on Thursday to 31,309.21 points.

Most of the other major European equity markets posted moderate losses. The EuroStoxx fell by 0.21 percent and the Paris Cac 40 stagnated at the previous day’s level. The London FTSE 100 was down 0.37 percent. The New York Dow Jones Industrial was last 0.17 percent up.

Despite recent soothing words from Fed chairman Jerome Powell that a tightening of monetary policy is still a long way off, the markets have not yet been able to shake off fears of rising bond yields, said analyst Sophie Griffiths from broker Oanda. A return of 1.5 percent is not much compared to the level before the pandemic. But the pace of the ascent is a cause for concern, according to Griffiths. On Thursday, the yield on ten-year US Treasuries rose significantly to 1.47 percent. Bonds become an alternative for investors when interest rates rise. Money from the stock market could then drain away.

Overall, the latest trend continued: Highly valued stocks and crisis winners were sold, again to be seen on the prices of Shop Apotheke, Hellofresh or Westwing. Value stocks, representatives of the “old economy” and those who profited from opening strategies after the lockdowns were more likely to be bought.

Volkswagen climbed to their highest level since the beginning of 2018 and, with a plus of 2.1 percent, were among the best DAX values. RWE rose at the top of the Dax by 2.5 percent. The utility’s stocks benefited from a buy recommendation from Societe Generale. At the end of the Dax, the papers of the chip company Infineon were in line with the weak technology sector with minus 6.5 percent.

Otherwise, the reporting season determined the events with figures from the pharmaceutical and chemical company Merck KGaA, the real estate company Vonovia and the consumer goods manufacturer Henkel from the Dax. Merck fluctuated strongly in the course of trading, but ended up 0.2 percent but unspectacularly. The Darmstadt-based company met expectations, so the tenor. Vonovia and Henkel rose by 0.9 and 1.7 percent, respectively.

The shares of the media group ProSiebenSat.1 in the MDax were very weak with minus 7.3 percent after a disappointing outlook. On the other hand, according to numbers and a medium-term more optimistic forecast, it went up by 1.8 percent for the papers of the plant manufacturer Gea. The business figures of the energy company Uniper rewarded de investors with a plus of 2.3 percent. In the SDax, Global Fashion Group slumped by 12.6 percent after placing a convertible bond.

The euro last cost 1.2038 US dollars. The European Central Bank (ECB) had set the reference rate in the afternoon at 1.2034 dollars.

Other topics of the day:

Bitcoin: Billionaire Mark Cuban VS Goldbug Peter Schiff – “Gold is dead, get over it”

Deutsche Post: Corona year was a record year – now capacities have to be increased – analysts still see so much potential for the share

Lilium Aviation: German air taxi startup could go public via merger with SPAC, according to circles

Global Fashion Group: Convertible bond worth 375 million euros announced – that is not at all well received by the market

onvista guide: CFD Trading – How You Can Make A Big Impact With A Small Stake

Measures in the canton of Zurich: no gatherings for 10 or...

Big titles expected as early as 2021

He insults Messi as a tumor: Verbal Petric derailment on TV

The new boss of the BVG is planning this 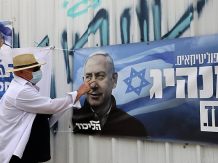 Israel votes for the fourth time in two years – Politics...