The German stock market showed a weak trend on Wednesday.Of the DAX opened the session 0.80 percent in the red at 14,543.58 points and stayed on red territory. Of the TecDAX also shows weaker in early trading.

The concerns about the pandemic mean that investors shy away from the risk – this is ensured above all by the ongoing measures to contain the virus. “With new restrictions in this country, there is growing concern that after lockdown could mean lockdown,” quotes dpa market watcher Timo Emden.

On the corporate side, further balance sheets are in focus. Including Bluechip E.ON: The energy company achieved its goals and expects higher profits in 2021.

The European stock exchanges are recording losses.Of the EuroSTOXX 50 gives way shortly after the starting bell has sounded.

Tuesday trading was down on Wall Street.

Of the Dow Jones had already started weaker and increased its losses more clearly, especially in late trading. With a discount of 0.94 percent it went to 32,422.43 meters in the evening. In addition, there was also the tech value index NASDAQ Composite on Tuesday and closed 1.12 percent weaker at 13,227.70 points.

An important hearing by US Federal Reserve President Jerome Powell before the House of Representatives Financial Services Committee did not provide any positive impetus. Wall Street prices added to their losses as Powell said some assets had risen in valuations.

In addition, the tightening of relations between China on the one hand and the USA, the EU and Canada on the other caused uncertainty in the US markets. First the western states imposed sanctions on Beijing, then China implemented countermeasures. Market participants fear that the tensions will have negative economic effects. “We’re probably in a cyclical upswing, but maybe we’ve been ahead of ourselves. This is a pause for thought: How fast will this recovery actually be?” Said Invesco’s fund manager Sebastian Mackay, according to Dow Jones Newswires.

The downward trend of the previous day continued on the stock exchanges in the Far East.

The Japanese leading index Nikkei ultimately listed 2.04 percent in the red at 28,405.52 points.

Corona worries weighed heavily on the mood on the stock market: A serious negative factor with a view to the third wave in Europe is the uncertainty about increasing economic weakness.

Windows 7 runs on millions of computers

Germany is bringing several ISIS members back from Syria 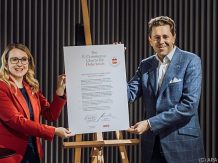 Smoothness and mild temperatures in Berlin and Brandenburg