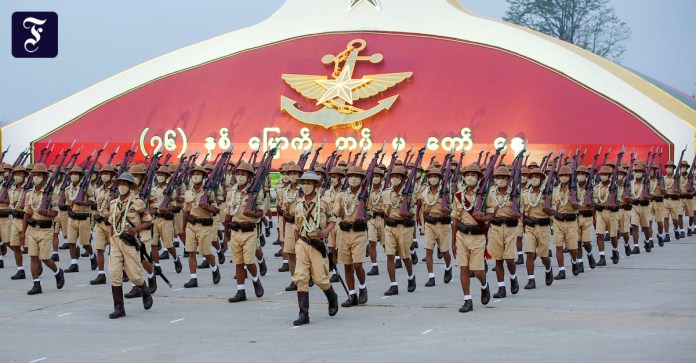 Mith bayonets attached, soldiers marched through Myanmar’s capital on Saturday. The occasion for the military parade was “Armed Forces Day”, which takes place on March 27th every year. The show of force in Naypyidaw was accompanied by particularly brutal action by soldiers against demonstrators in various parts of the country. The news portal “Myanmar Now” reported more than 50 deaths; thirteen of them in the second largest city of Mandalay and seven in Yangon, the largest city and former capital.

The day before, the military had issued a barely concealed warning on state television. Accordingly, people should learn from the tragedies of the past “that you run the risk of being shot in the head and back”. The politician Sasa, a member of an anti-government against the military coup, said at an online event: “Today is a day of shame for the armed forces.”

This Saturday, Myanmar is celebrating the beginning of the resistance of the army of national hero Aung San against the Japanese occupiers in 1945. The general was the father of Aung San Suu Kyi, who was arrested by the military and Nobel Peace Prize laureate. The Tatmadaw, as the military is called in Myanmar, sees itself as the successor to the Liberation Army and guardian of national unity. Despite decades of oppression, it was seen in this light by many members of the majority population.

But in the weeks since the military coup on February 1, the military has experienced an unprecedented wave of opposition. “Now people hate the army. Not just Min Aung Hlaing. You hate the whole army. The public outcry is enormous, ”said a Myanmar coordinator of various resistance groups in the FAZ

According to a human rights organization, soldiers and police have already killed more than 328 people, not including the victims on Saturday. It is estimated that around a quarter of the victims died from headshots. Nevertheless, people across the country took to the streets again on Saturday against the coup. The military had apparently hoped, after the disempowerment of the government of Aung San Suu Kyi, to bring the country quickly under control and to enforce a certain normality.

Myanmar is now a long way from that. General Min Aung Hlaing promised elections again on Saturday, but did not give a date. “The army wants to keep democracy hand in hand with the entire nation,” said Min Aung Hlaing, according to the BBC. “Acts of violence that endanger stability and security in order to make demands are not appropriate,” warned the general.

In view of the ongoing resistance against the military, there are now fears that the spiral of violence could continue to turn. In an interview with the FAZ, the resistance group coordinator said that he even considered it possible that the military could also use heavy military equipment in the Myanmar heartland in the future, similar to what it did in the border regions where the military had been fighting against ethnic rebel armies for decades fights.

Some of these armies have also opposed the military coup. According to information from the FAZ, they are planning an alliance with various resistance groups and the formation of a “federal army”. Many demonstrators are also calling for military intervention by the international community. However, they are divided when it comes to dealing with Myanmar. While diplomats from Western countries stayed away from the parade, Moscow had even sent its deputy defense minister. In his address on Saturday, General Min Aung Hlaing called Russia a “real friend”.

Lucky Luke anniversary year: new publications and a look back –...

The Bachelor’s new favorite ?: From the shadows into the light