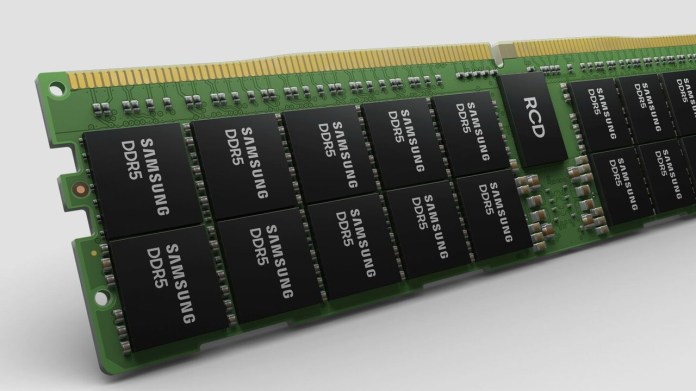 Samsung is showing off its new DDR5 RAM, which not only works more than twice as fast and more economically than DDR4, but also uses high-k + metal gate technology (HKMG) for the first time for DDR5. Eight chips are stacked on top of each other and connected by means of TSV. Several such stacks enable a DDR5 module with 512 GByte.

The use of a high-k dielectric for better insulation against leakage currents in the transistor has long been common in CPUs. At RAM, Samsung first used HKMG in 2018 for its GDDR6 memory. The use of HKMG is a novelty for DDR5 memory, according to Samsung.

Compared to DDR4 with 3,200 MT / s as the fastest JEDEC standard, Samsung’s DDR5 module should achieve a data rate of up to 7,200 MT / s that is more than twice as high. Manufacturers such as SK Hynix had even spoken of up to 8,400 MT / s for DDR5, but had not yet presented any finished products. Thanks to HKMG, the power consumption of the DDR5 RAM is said to be 13 percent lower, although the basis for comparison is not so clear, as is often the case with vague marketing talk instead of bare facts in the press release.

Overall, the 512 GB DDR5 module accommodates at least 256 memory chips (dies), because each individual die has a capacity of 16 Gbit, which corresponds to 2 GByte. However, the vertical age of DRAM has long since begun and eight of the 16 Gbit dies are stacked on top of each other and combined in a chip housing (package) with 128 Gbit (16 GByte). Mathematically, 32 of these chip components should then be combined on the DIMM to form a 512 GB module. However, Samsung is showing an RDIMM for servers that even accommodates a total of 40 chip modules. The additional modules should serve as a buffer for error correction.

When these DDR5 modules with 512 GB, which are primarily intended for servers, will be available remains unknown. Because Samsung only speaks of the fact that currently “different variants of the DDR5 memory“Can be sampled at business customers.

The first server platform with DDR5 support is not expected to appear until the end of 2021 or beginning of 2022 with Intel Sapphire Rapids anyway. In the desktop sector, Intel Alder Lake should make the start this year, at least for notebooks. Team Group was one of the first module providers to announce DDR5-DIMMs and DDR5-SO-DIMMs for the third quarter of 2021, but which are not yet working quite as fast with 4,800 MT / s.

Oberhausen: Children are said to have dug a hole almost two...

Retirement and nursing homes: How Speyer became a corona hotspot