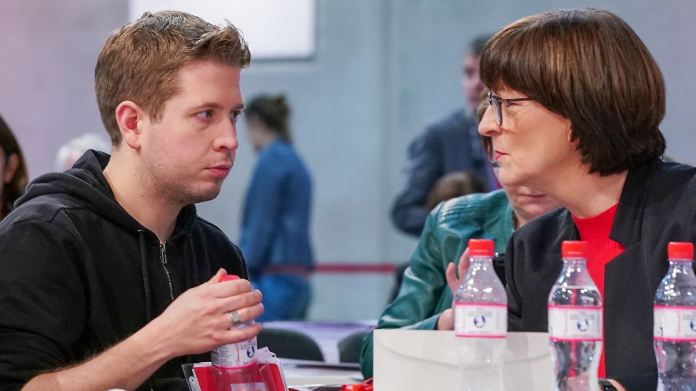 With a contribution on identity politics, SPD politician Thierse triggers a heated debate. Now the former President of the Bundestag is backed by the historian Peter Brandt. In a guest post, Willy Brandt’s son goes hard with the SPD leadership.
In the dispute between ex-Bundestag President Wolfgang Thierse and the party leadership of the Social Democrats, a son of the former SPD Chancellor Willy Brandt has now also spoken out. In a guest article in the “Frankfurter Allgemeine Zeitung” (FAZ), the historian Peter Brandt accuses party leader Saskia Esken and her deputy Kevin Kühnert of “failure” in dealing with Thierse.

The background to the dispute between Thierse and the party leadership is an internal email in which Esken and Kühnert were “ashamed” of unnamed SPD representatives who painted a “backward-looking picture of the SPD”. Apparently Thierse was meant, who had previously objected to “left identity politics” and gender-sensitive language in a “FAZ” article.

In his polemic, Thierse criticized the claim of minorities to define for themselves what is right and wrong for them on the basis of their identity, instead of openly discussing it. According to the SPD politician, there are “radicalizations of the discourse that tend to exacerbate confrontation” and “make it harder to find common ground.” A heated debate ensued.

In his guest article, which was created together with the publisher Detlef Prinz, Brandt defends Thierse. Thierse worried about the cohesion of the community and developed an offer for a minimum consensus within the social democracy, write the two. In normal times, a “sovereign party leadership” would then have invited to a discussion and offered the protagonists a contentious platform.

This could have been the prelude to a debate in which the focus is not on exclusion, but on the question of what actually binds party members towards those who really threaten this democracy. The fact that this did not happen was the “real failure of the SPD leadership,” said Brandt and Prinz.

The fact that Esken and Kühnert let it get this far instead of simply apologizing because in their “shame” towards Thierse actually distanced themselves from a considerable part of the SPD members, points to the core of the superfluous dispute. At the same time, it shows that the SPD lacks a political compass, say Brandt and Prinz. The party leadership is not in a position to politically manage a debate conflict.

Apple’s new flagships are getting cheaper

US election 2020: Trump supporters want to sue back millions of... Teledyne: What does that mean for the course? ()

There are hardly any native fish species left in the Arno...