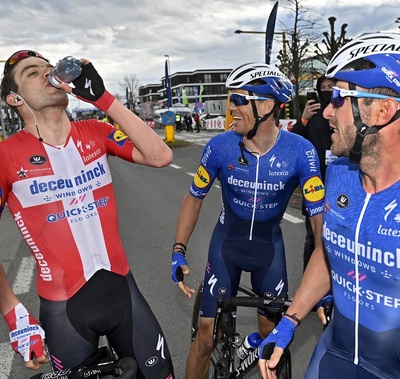 “I knew after the first start that I wouldn’t have a chance in the sprint. That’s why I had to drive away and try it on my own to still be able to win the race. For me it was all or nothing at the moment,” explained Asgreen. who opened the final with a first attack 65 kilometers from the finish and determined the race as a soloist for a long time.

Deceuninck has everything under control

On the other hand, van der Poel had to be content with third place against the Quick-Step superiority, Van Aert even fell out of the group of favorites in the final and was only eleventh, 90 seconds behind Asgreen. On the other hand, the strong Austrian Marco Haller (Bahrain – Victorious), who had been in the breakaway group all day, should be satisfied with tenth place.

Senechal and Stybar also earned a hard work card, who neutralized the opponents’ attacks of desperation in the final and pulled van der Poel & Co’s teeth. “We were extremely strong and the guys behind me did it cleverly and blocked the groups well. My thanks go to the team. That was a great team performance today. It wouldn’t have been possible today without the team,” said Asgreen.

The German professionals played no role. Nils Politt could not start with his Bora-hansgrohe team after the Briton Matthew Walls tested positive for Corona. Jonas Koch (Intermarché -Wanty Gobert) and John Degenkolb (Lotto Soudal) finished in 28th and 29th place, each 3:04 minutes behind.

A breakaway group formed early on around Haller, André Greipel (Israel Start-Up Nation) and the Swiss Johan Jacobs (Movistar), who maintained a lead of over two minutes up to 100 kilometers from the finish.

On the Taaienberg, 80 kilometers from the finish, Deceuninck – Quick-Step took over the reins and, with full team strength, ensured a selection in the field and reduced the gap to the top to just 50 seconds. As a result, a group of about ten people followed behind the outliers, in which Deceuninck – Quick-Step was strongly represented and in which van der Poel and Van Aert were also present.

After Haller’s breakaway group had been set by the pursuers, Asgreen attacked 66 kilometers from the finish on Boigneberg, while Van Aert had fallen behind after a defect. The chasing group kept making isolated attacks, but none of them brought Asgreen back.

Over the last 45 kilometers, Haller, Anthony Turgis (Total Direct Energie), Markus Hoelgaard (Uno-X), Gianni Vermeersch (Alpecin – Fenix), Oliver Naesen (AG2R Citroen) and Senechal set out to chase the outlier. At Paterberg the gap was still 20 seconds, behind which Van Aert, who had caught up again, attacked and pulled Stybar, van der Poel and Van Avermaet with him.

On the following Oude Kwaremont, the Van Aert group caught up with the six pursuers, so that now ten men were in pursuit of Asgreen. Since the front runner was only ten seconds ahead, the merger was imminent, but it did not materialize. Dylan van Baarle (Ineos Grenadiers) and Yves Lampaert, the fourth Deceuninck driver, caught up with the pursuers 27 kilometers from the finish.

Asgreen does not give up and rides the decisive attack

In the Varent cobblestone sector, Van Aert and van der Poel, who had done a large part of the follow-up work, stopped their efforts for the time being. For this, the Deceuninck riders took the lead and thus skillfully took the pace out of the group. Asgreen’s lead increased again to 30 seconds. Shortly afterwards Lampaert dropped out of the chasing group due to a defect, the chasers continued to disagree and Asgreen maintained his lead.

However, it finally melted down at Tiegemberg. First, Van Aert attacked with van der Poel on the rear wheel. But when the Belgian could not keep up the high pace, van der Poel countered and formed a chasing quintet with the AG2R duo Naesen and Van Avermaet as well as Senechal and Stybar, which van Barle joined shortly afterwards.

With the exception of the Deceuninck duo, everyone in the group pulled together, on the one hand to keep Van Aert at a distance, but above all to catch Asgreen. That succeeded twelve kilometers from the finish, so that now seven drivers set off together towards Harelbeke.

The next attack took place five kilometers from the target. Surprisingly, Asgreen went on the offensive again and actually got away. At first none of the pursuers could or did not want to pursue, when van der Poel and Van Avermaet finally reacted, Senechal and Stybar were each at the rear wheel.

As a result, Asgreen was able to significantly expand its lead and ultimately secure a victory.

Permafrost and minus degrees in Berlin and Brandenburg Distribution begins: who gets how many FFP2 masks?