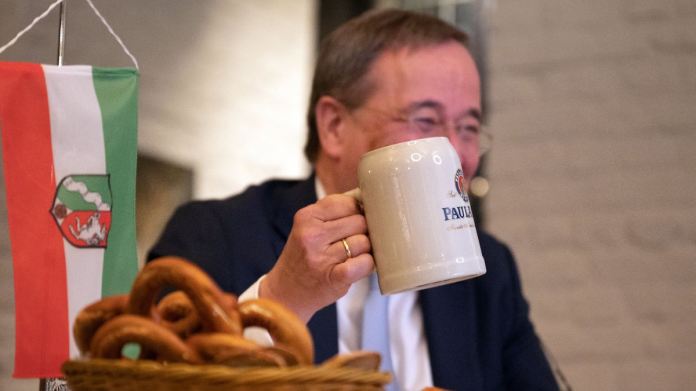 Markus Söder sits in the state parliament of Bavaria, Armin Laschet in that of North Rhine-Westphalia, neither of them have a parliamentary mandate so far. But that should be a prerequisite for a Federal Chancellor, says the CDU boss.
In the opinion of CDU leader Armin Laschet, the future candidate for chancellor of the Union must also run for the Bundestag. “A head of government should also be a member of parliament,” said the North Rhine-Westphalian Prime Minister of “Welt am Sonntag”. For him personally, however, this question will only arise after the final decision on the candidate for chancellor has been made.

He confirmed earlier statements that he wants to clarify the candidacy between Easter and Pentecost with CSU boss Markus Söder and that the results of the state elections next Sunday in Baden-Württemberg and Rhineland-Palatinate should not have any influence. The SPD did not help their early determination, he said to justify the late personnel decision. In addition, the program must first be clarified and coordinated between the CDU and CSU.

In terms of content, Laschet spoke out in favor of creating a digital ministry that has been discussed for a long time, with cross-cutting responsibility across various departments. “It will inevitably be a very powerful ministry,” he said. In addition, administrative processes and approval procedures would have to be shortened. “We need a very big reform project, a real federalism reform. We want to tackle that after the pandemic in the next election period,” said Laschet.

With a view to possible relaxation of the corona measures, he advised loosening data protection. “If we could mitigate the restriction of many other basic rights, then data protection must also take a back seat.” The protection of life and limb has priority.

Also available as a one-off purchase

Andrej Babis: The head of the Czech government doubts the meaning...

Coronavirus: So far, domestic vaccination centers have requested over 63,000 doses...

Offer for everyone – Schwechat: Corona tests as a cash benefit

Four questions about the Dortmund crime scene: an ideal world.