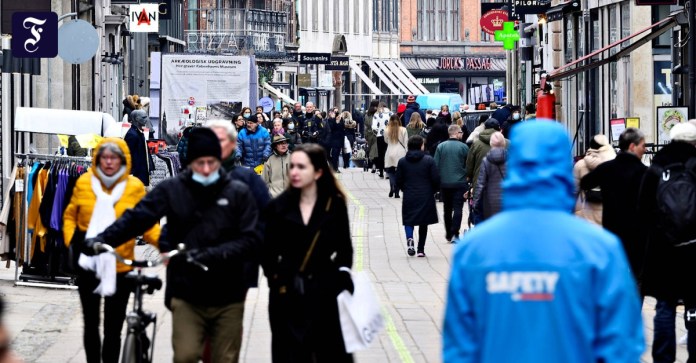 NAfter long negotiations, the Danish government has presented a plan for the way out of the lockdown. The Social Democratic Prime Minister Mette Frederiksen announced after the agreement with several parties on Monday evening in Copenhagen. Central points of the opening strategy are the rapid progress in the vaccination campaign in the country and the use of a corona passport. Most of the restrictions on public life in the fight against the spread of the coronavirus are to be lifted when all Danes over 50 are vaccinated, said Frederiksen. The Danish government expects that this target will be achieved by the end of May.

But there should also be further easing from the beginning of April. After the primary schools that have already been opened, higher grades should also be allowed to return to schools, at least with alternating lessons. Service providers such as hairdressers are also allowed to reopen, even if customers are then supposed to present their Corona passport. This records whether you have been vaccinated, have a current negative test or have already survived an infection. It should be possible to present the passport digitally via an app on the mobile phone or, if necessary, also print it out.

This is followed by further opening steps every two weeks, museums and outdoor restaurants are allowed to open in mid-April, and theaters and cinemas are also allowed to open at the beginning of May. Even after all Danes over 50 years of age who wish to be vaccinated have been vaccinated, individual restrictions should remain in place for the time being. It is mainly about large events and nightlife, where there is a risk of mass spread of the virus.

In the Corona crisis, Denmark had repeatedly reacted very quickly and hard to the increasing number of infections. In this way, the infection process usually remained under control. The procedure also brought criticism from the government – as after the culling of the mink in the country, for which there was initially no legal basis. Even after the appearance of the British corona mutant in Denmark, Copenhagen reacted quickly by tightening the lockdown.

The spread of the mutant was quickly noticed in Denmark, as the country sequenced virus samples to a large extent. Although the mutant now also dominates the new infections in Denmark, the number of infections fell in January and February, but recently rose again slightly. According to data from the European Center for Disease Prevention and Control, the 14-day incidence in Denmark is currently at a similar level to Germany, where the number of infections is rising rapidly. Eleven percent of Danes have been vaccinated so far.

New album from Taylor Swift: Sister from the Undergrowth

Report: This WhatsApp function is coming back – Panorama State of Salzburg: FFP2 mask delivery must be checked again

53,000 euros per seat: costs for Berlin Senate Kindergarten go through...