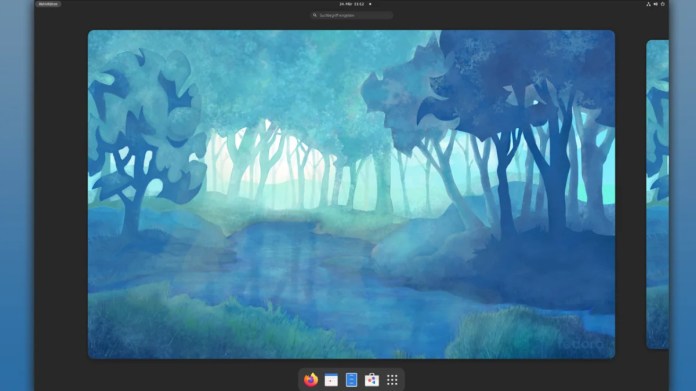 After the last priority in the new GNOME versions was to improve the performance and stability of the desktop environment, GNOME 40 brings comprehensive visual changes to the shell for the first time. In addition, the new version also has many functional innovations in its luggage.

When the GNOME project presented the GNOME Shell in 2011, which turned the desktop environment inside out in terms of appearance and functionality and set it apart from other desktops, many users turned their backs on the project. The underlying idea of ​​distracting the user as little as possible from his current activity finally sparked: In the meantime, the project and Shell have developed a loyal fan base, which now has a lot to offer.

The GNOME Dash now slides from the bottom up into the screen, and the Application Launcher now scrolls horizontally and not vertically as before.
(Image: screenshot)

All those who missed the announcement of the new versioning scheme in September 2020 should be taken aback by the version information. Because there is plenty of space between the version number of the last stable GNOME release (3.38) and the current “40”. Anyone who expects a technical quantum leap or an epoch-making total rebuilding like the change from GNOME 2 to GNOME 3 is wrong: The new scheme is intended to circumvent the inadequacies of the previous versioning. We have already explained details on this in an earlier report:

From the vertical to the horizontal

The user notices the first clear visual change immediately after logging in to GNOME 40: Where the environment used to simply present an empty desktop with wallpaper, you now end up in the “Activities” view. Until now, you had to click on the “Activities” button in the top left to get to this view. In the activity view, the second and most obvious change of the new version is suddenly presented: The “workspaces”, ie virtual desktops, are now arranged horizontally next to each other instead of vertically as before. This not only goes much better with modern ultra-widescreen monitors, but also makes navigating between the individual desktops much more pleasant thanks to new gestures – control options for the desktop, which we will come back to later.

As before, the user starts applications in GNOME 40 via the quasi-dock (“Dash”) or via the app launcher. In the standard configuration, however, the dash is no longer on the left edge of the screen, but slides elegantly into the picture from below. In terms of functionality, it now resembles the macOS dock even more than before, because for the first time in GNOME 40 there is an optically separated area for applications that are permanently stored in the dash. A dashed line separates those applications whose icons are permanently in the dock from those that only appear there because they are currently running.

The Application Launcher, the main menu for applications in GNOME, now also scrolls horizontally. Particularly practical: During the full view of the applications available in the Application Launcher, the GNOME Shell shows the desktops in a miniature view. With a click of the mouse, the user can not only select the tool he wants to start, but also drag and drop it directly to the desktop on which it should run.

The new features, albeit extensive, do not represent a completely new user experience: If you got along with the GNOME Shell in GNOME 3.38, you won’t have any problems with version 40 after a few minutes of getting used to it.

Everything is so nice and round here

The developers for GNOME 40 have worked on the corners of their programs extensively with sandpaper, so that they now look nicely round and therefore more elegant. In addition to most of the GNOME core applications, this also applies to the central controls such as the dash, the preview of the virtual desktops and the entries in the menu bar at the top. That the chic of round corners is subject to fashion – for free. In any case, the new window frames fit in well with the overall appearance of the desktop with its round controls.

GNTM: Ex-winner is now married to a billionaire

Corona vaccination: So far 8,360 vaccination doses have been delivered to...

Rebel Wilson was kidnapped at gunpoint in Africa

AfD voters as drivers of the pandemic?

Almost 50,000 traders from Asia are registered with the Berlin tax...