The World Cup qualifying game between Switzerland and Lithuania should have started punctually at 8.45 p.m. on Sunday evening. But when the Swiss anthem was supposed to have sounded in St. Gallen’s Kybunpark, not a single player was on the pitch. Instead, one of the gates was examined by FIFA officials. Result: 5 centimeters too high. The gate had to be replaced. Adrian Arnold, head of media for the Swiss Football Association, says: “Apparently it happens more often that there can be changes to the goal while the players shoot themselves in.”

But that’s not all with the starting difficulties in St. Gallen: When the Lithuanian anthem began 15 minutes late, there were sound problems. And when the referee wanted to whistle, a hole was found in the net of the replacement goal. After fixing this with duct tape, it finally started – and how. Not even two minutes had been played when Breel Embolo sent his teammate Xherdan Shaqiri with a through pass into the penalty area and the latter confidently converted to 1-0. The next lightning start in Switzerland.

Then the national team did not allow anything at the back and played one chance after the other in the front. The Swiss would have wished that the goal that was too big would have been put back into the stadium. Seferovic and the substitutes Zuber and Zakaria had a hard time hitting the goal in accordance with the rules.

Man of the game: Ruben Vargas, 22, was the best player on the pitch – Shaqiri also performed well, as he did against Bulgaria. In the end it was an unspectacular 1-0 against a weak opponent. That cannot meet the demands of this talented team. With two wins from the first two World Cup qualifying games, however, the obligation was fulfilled. (wed)

The kick-off of the World Cup qualifying game between Switzerland and Lithuania has been delayed for a curious reason: the goals in St. Gallen are five centimeters too high and have to be replaced. (Video: Video: SRF)

Before federal-state meetings: These lockdown tightenings are under discussion 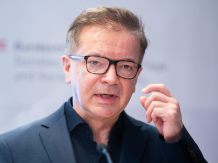