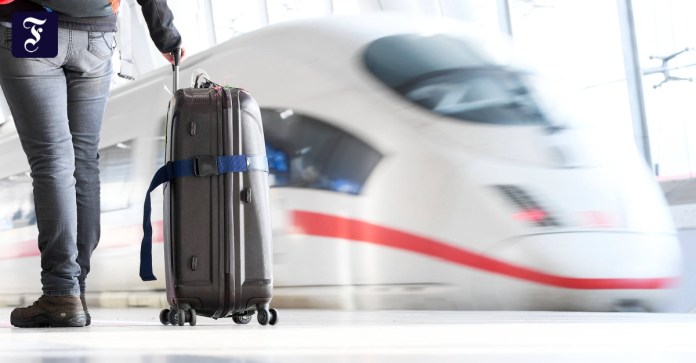 FDeutsche Bahn guests can continue to expect the range of trains and journeys to grow. The supervisory board extended the contract of CEO Richard Lutz on Wednesday, thereby underscoring the ongoing growth program. The number of long-distance passengers is expected to be twice as high in 2030 as in 2015. Billions will flow into the rail network, additional employees and trains.

Lutz’s name is inextricably linked to this strategy, said Michael Odenwald, Chairman of the Supervisory Board. “This now has to be implemented bit by bit for the benefit of our customers.” As the owner, the federal government sees more rail journeys as a lever to improve the German climate balance.

“Above all, we have a homemade crisis”

Meanwhile, the state-owned company’s financial problems have not been resolved. After a year of corona crisis, Lutz will present the balance sheet for 2020 this Thursday – with a sharp drop in sales and a billion-dollar loss, as is expected.

From the perspective of the “Rail for All” alliance, this has only partially to do with the corona pandemic. “Above all, we have a homemade crisis,” said Winfried Wolf, the co-author of an alternative annual report that the alliance presented on Wednesday. Its members include trade unions, political youth organizations and environmental protection associations.

The alliance sees the railway in a long-term imbalance with an ailing rail network, costly large-scale projects, high-loss international business, not very profitable investments and a bloated administration. The debt has risen to 33 billion euros.

For months, the federal government has been trying to get a billion-dollar cash injection for the railways from the EU Commission. The Supervisory Board did not comment on the Group’s financial crisis after its meeting on Wednesday. Resolutions of the general meeting on the same day were initially not published.

The 56-year-old Lutz should now run the railway at least until March 2027. The Board Member for Passenger Transport, Berthold Huber (57), will remain on board for just as long. Infrastructure director Ronald Pofalla (61) will continue until July 2025, when he will reach retirement age.

The FDP criticized the contract extensions – in view of a dramatic economic situation and years of delayed reforms, there could hardly be a worse time. The Greens see “a bitter aftertaste”. The management should be saved through the federal election in September, the scope for rail policy should then be kept small.

However, the boards of directors sign without the usual raise. Actually, a surcharge of ten percent on the fixed salary was planned. At Lutz it amounts to 900,000 euros a year; with variable components it came to 1.73 million euros in 2019. At Pofalla and Huber, 650,000 euros are fixed. The unions opposed the increase on Wednesday. In the coming year, however, the topic should be discussed again, it was said from the environment of the supervisory board.

Because of the large loss of income, the railway and transport union had agreed to a zero round for the collective bargaining employees this year. The salaries of senior executives are also not expected to increase in 2021. In return for the planned state aid, Deutsche Bahn had also promised that the Group’s management board would not receive any bonuses for 2020. “The lockdown is an investment in the future” policy

Apple is the most valuable company in the world – Vorarlberger...