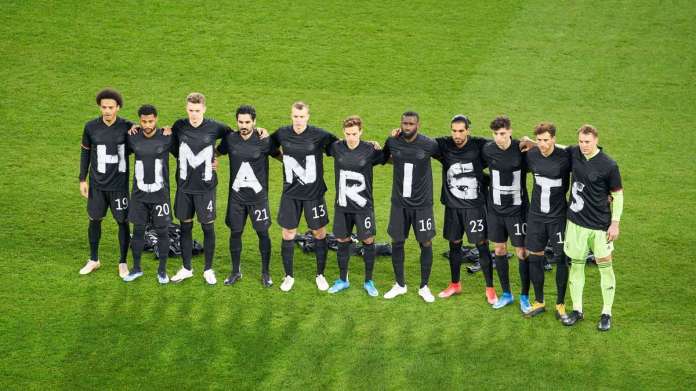 The DFB team positioned itself on the human rights violations on the World Cup construction sites in Qatar. Jogi Löw and Joshua Kimmich responded to the fans’ allegations.

Update from March 27th, 5.49pm: After the “Human Rights” campaign by the German national team, there was a lot of criticism for the DFB-Elf, many votes against suspected a marketing campaign by the association. After the game, a brilliantly staged video was posted in the style of an advertising clip, in which the players prepared the shirts for the action, which further fueled the critical voices. The fans’ reproach: the national team is more concerned with PR than with the human rights of workers on construction sites in Qatar.

At a press conference, national coach Joachim Loew and Joshua Kimmich defended themselves against the allegations. “If someone thinks that our players, Manuel Neuer, Ilkay Gündogan, let themselves be harnessed to such a cart for marketing reasons, then they are very wrong. Our players are very, very interested and know what is going on in the world, ”said Löw, emphasizing the players’“ initiative ”. The 61-year-old praised the action and apparently did not understand the point of criticism from the fans.

“In general, I am of the opinion that we are ten years too late for a boycott. Now you have to take the opportunity to address things with the charisma that we have, ”said Joshua Kimmich and complied with the general tenor at Bayern. As a result, a multi-million dollar collaboration with the emirate is beneficial for local human rights.

DFB: Kimmich defends video on human rights campaign – “Speaks for the quality of the cameramen”

The FC Bayern midfielder also does not seem to be able to understand the core of the discussion about the video staging – or want to. “The fact that there was talk of a glossy video speaks for the quality of our cameramen,” says Kimmich with a smile at the press conference. In football you have the opportunity to draw attention. “But not only we footballers are in demand, but also your media, for example,” said Kimmich. The latter, however, have been reporting for years about the inhumane conditions, slavery and the more than 6500 deaths of workers on the World Cup construction sites in Qatar.

DFB: National team is setting an example against the World Cup in Qatar – but criticism from the fans hails

Duisburg – Before the World Cup qualifier against Iceland, the German national players set an example and presented themselves in bibs with an important message. “Human Rights”, was written in individual letters on the T-shirts, which were demonstrated by the eleven DFB players. The message is clear, it is about the inhumane circumstances of the workers in Qatar, where the next World Cup will take place in 2022.

DFB: Goretzka explains human rights statement – “Want to make it clear that we are not ignoring this”

According to research by the British Guardian, around 6,500 workers are said to have died since the World Cup was awarded to the emirate. The Norwegian national team also made the same statement on their shirts at the qualifying game in Gibraltar, Leon Goretzka explained the campaigns after the 3-0 win against Iceland on the RTL microphone.

He skilfully evaded the question of who was the initiator of the campaign and said: “Something like this always happens together. We also wrote the script on it ourselves. The Norwegians have already done it, and we also have a large platform to stand up for our values. The message is pretty clear, ”said the FC Bayern professional. “We talked about it in the team, we have the World Cup ahead of us and we want to make it clear to society that we are not ignoring it.”

But this is exactly what the fans really liked. “And what do you answer when you are asked whether you want to take part in the World Cup in Qatar?” Writes an angry Twitter user. “A human rights statement without a World Cup boycott is worthless,” says another. The opinion of the supporters is quite clear, one user would have liked a clearer reaction from the team and writes: “It’s basically praiseworthy, but if the DFB team also mean the same thing about human rights, they would be off before kick-off went.”

Further tweets critically discussed the statement before kick-off. “Letters on training bibs do not bring 6500 workers from India, Pakistan, Nepal, Bangladesh and Sri Lanka back to life,” writes one user. “Anyone who is seriously committed to human rights will not take part in the 2022 World Cup in Qatar!”