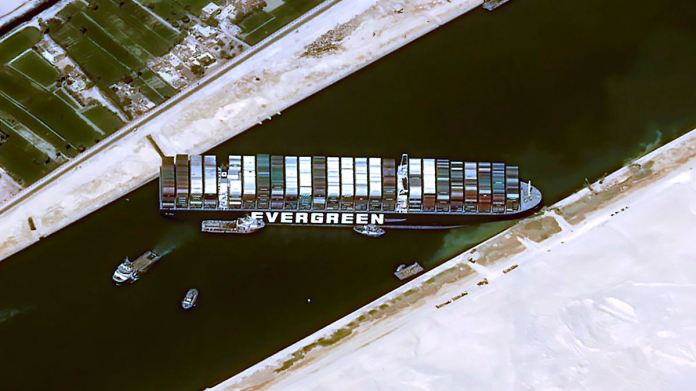 For two days, rescue teams have been trying to free the wrecked super freighter “Ever Given” from the Suez Canal. Hopes that the blockade will end soon are fading. Shortly before arriving, the container ship was on a creative course.
The “Ever Given” continues to block the Suez Canal – and it doesn’t look like that will change anytime soon. According to rescue teams, the liberation of the stuck container ship could take weeks. This cannot be ruled out, said the head of the Bos company, Peter Berdowski, who told the “Nieuwsuur” broadcaster. The bow and stern of the 400 meter long ship had been pushed up on the sides of the canal. The “Ever Given” is thus “like a huge stranded whale”.

By late afternoon, more than 200 ships were stuck on both sides of the canal, one of the most important waterways in the world. The world’s largest container shipping company Maersk, according to its own statements, checked whether it should send its ships around the southern tip of Africa with an additional journey time of up to six days.

The enormous weight of the ship weighs on the sand on both sides of the canal, explains Berdowski: “We may have to work with a combination of weight reduction by fetching containers, oil and water from the ship, using tugs and dredging sand”. The Japanese owner Shoei Kisen apologized for the incident. He also confirmed that the work was “extremely difficult”. It is not clear when the ship can be made afloat again. There could be further delays if part of the cargo has to be removed from the ship. A higher tide is expected on Sunday, which could possibly help with the rescue, it said from shipping circles.

How the accident came about is still unclear. The master provided evidence of his maneuverability immediately before entering the canal. The Vesselfinder tracking website tweeted a picture of the route the freighter was taking while waiting for the signal to arrive. It doesn’t take a lot of imagination to see what the helmsman “drew” in the water: a penis. The “Dick Pic” is completed by two larger circles, which can be interpreted as buttocks.

A mistake? Rather unlikely. A spokesman for “Vesselfinder” confirmed to the “Vice” portal that the ship actually traveled the route that way. There is no room for conspiracy theories or for erroneous data. Here the route can also be followed by video. It is not unusual for ships to “meander around” while waiting to enter, a spokesman for Bernhard Schulte Shipmanagement explained to “Spiegel”.

In the meantime, the creative navigator may have lost his lust for practical jokes, given the misery that the accident caused: around 30 percent of the world’s container volume and around twelve percent of all goods are shipped through the Suez Canal. “Every port in Western Europe will notice this,” said a spokesman for the port of Rotterdam, the largest in Europe. Russia and Saudi Arabia, the two countries that send the most oil through the canal, are likely to be particularly hard hit. India and China, on the other hand, are the largest importers.

The traffic jam is also likely to cost the German economy dearly. “That will keep us busy for at least another month or two,” said supply chain expert Joachim Schaut from the logistics service provider DB Schenker.

Acquittal for worm in the doping process

Closure of Dortmund Airport is a realistic scenario

This is how Christian Drosten assesses the danger