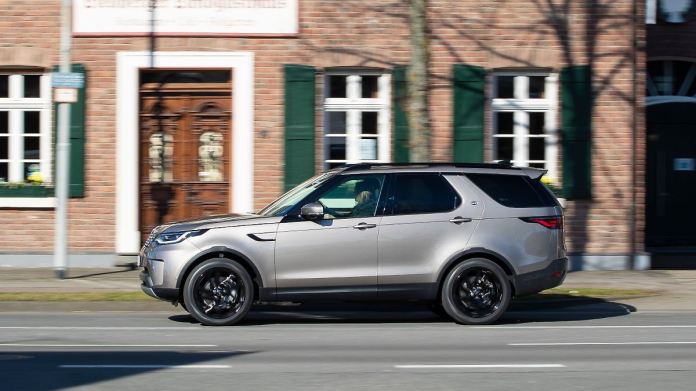 Of course, Land Rover also has the electrification of its vehicles on the agenda and in a few years’ time it will also be electric through the terrain. But before that happens, the Discovery will go into the next round with an update and as a mild hybrid.
You have to look carefully to recognize the new vintage Land Rover Discovery from the outside: Minimally changed headlights and taillights serve as clues, but you can only be sure with the identification of the model lettering on the boot lid, which is now emblazoned on a glossy black background.

A look into the interior also reveals the year 2021 – the touchscreen, which has now grown to 11.4 inches and thus indeed looks stately, not only looks more stylish, but can also be operated even better thanks to the modified system. The instrument cluster remains analog in the graphic and is apparently intended to emphasize the rustic character of the disco, as it is affectionately known by its fans – but it still consists of an electronic display surface and is therefore as flexible as possible in terms of information output.

On the other hand, the prices are not rustic at all, customers have to shell out at least 62,045 euros for the entry-level model. This is now a 249 hp, three-liter, six-cylinder diesel (instead of the two-liter and four-cylinder version in the past). The same-displacement, more powerful diesel with 300 hp costs from 67,022 euros, the petrol engines (two-liter four-cylinder with 300 hp and three-liter six-cylinder with 360 hp) start from 61,044 and 67,052 euros.

Similar to the Jaguar F-Pace, the Discovery also has the new three-liter in-line six-cylinder diesel with slight hybridization using a starter generator. If you listen carefully when you press the start button, you will experience how the heavy machine just “pops” – there is no longer any typical starter noise. But this is not the only thing that such a starter generator can do: The low-noise electric motor also boosts the crankshaft when starting, so that even the smallest turbo lag disappears. In fact, the big off-road vehicle gets going with almost no delay, and it does so with pomp, because 650 Newton meters of maximum torque from 1500 tours are simply an announcement. This is especially fun when you consider that Land Rover shows 7.3 liters as combined NEDC consumption for the diesel engine. In practice it is two liters more, but considering the power and weight, that’s okay.

Gasoline is thick and thirsty

The three-liter six-cylinder petrol engine, which is already known from the Range Rover models but has been reduced by 40 horses for the Discovery, needs a good two liters more despite electrification including an electric compressor – and that also of the more expensive premium petrol. But whoever has the budget will overlook it given the silky running of the machine. As smooth and quiet as this engine is hardly a modern direct injection engine to the point. The traction plateau only subsides beyond the 5000 tours. And although there is less traction at the top with 500 Newton meters, the Otto is more of a pleasure engine – because it turns happily into the limiter, pushes the off-roader, which with its crew likes to weigh over 2.5 tons, forward with force and literally leaves it melodious machine tones in the passenger compartment.

It is spacious and offers space for up to seven people or optionally 2485 liters of luggage. Lavishly upholstered armchairs predestine the Discovery for long journeys, as usual, while the supple, standard air suspension contributes to the comfortable driving experience. And so that there is no boredom, there is a WLAN hotspot with which up to eight end devices can be combined. Two smartphones can be connected to the PIVI system at the same time. An additional display area is generated by a head-up display, which is available for an extra charge of 1384 euros. Features such as an autonomous braking system, lane departure warning and traffic sign recognition ensure safety at home.

Finally, I would like to point out that, despite all the infotainment, comfort and utility benefits, the Discovery is also a maximally powerful climber. However, you have to reach into the pool of options if you want to exhaust all off-road capacities. The off-road reduction costs 427 euros extra and an active rear-axle limited-slip differential even costs 1275 euros, which then easily moves the price towards 70,000 euros.

Coronavirus in Stuttgart: How schools and parents deal with the early...

Frankfurt: A memorial for Blanka Zmigrod

Snow on the holidays ?: “White Christmas in Berlin would be...