After leaving “Deutschland sucht den Superstar” prematurely, Dieter Bohlen spoke up for the first time and talked about his future plans.

For the first time since his premature retirement became known on the RTL casting show “Deutschland sucht den Superstar”, pop titan Dieter Bohlen (67, “Brother Louie”) has spoken out. In an Instagram video, which the slain juror uploaded at the same time as the semi-finals broadcast live on Saturday evening (March 27th), Bohlen said that he was planning “big things”.

How much Bohlen has changed in 19 years of DSDS, we show you in the video above!

“Got a lot of offers”

“I am very satisfied with the situation at the moment. You know, a thousand new doors open when one closes again,” said Bohlen confidently on the record. Every day “some people” would have called him and he would have received “a lot of offers”. Now he is sounding out which projects he will tackle next, the 67-year-old continues.

“Of course I will remain loyal to you. […] I’m planning big things, you will hear from me, “promises Bohlen at the end. He never mentioned his end on” DSDS “. And although Bohlen had canceled the last two live shows of the casting show, allegedly due to illness, he made one extremely fit and agile impression.

Entertainer Thomas Gottschalk (70) spontaneously stepped in for the sick Bohlen, who completed the jury alongside Mike Singer (21, “Deja Vu”) and Maite Kelly (41). Jan-Marten Block (25), Karl Jeroboan (30), Kevin Jenewein (27) and Starian McCoy (19) make it into the final. They will fight for victory next Saturday (April 3rd).

The tragic family history of the Kennedys

Killing offense in Ebersbach an der Fils: Duo is said to... 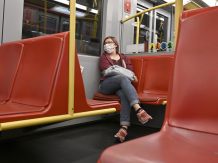 Wiener Linien are waiting for the new FFP2 mask regulation –...