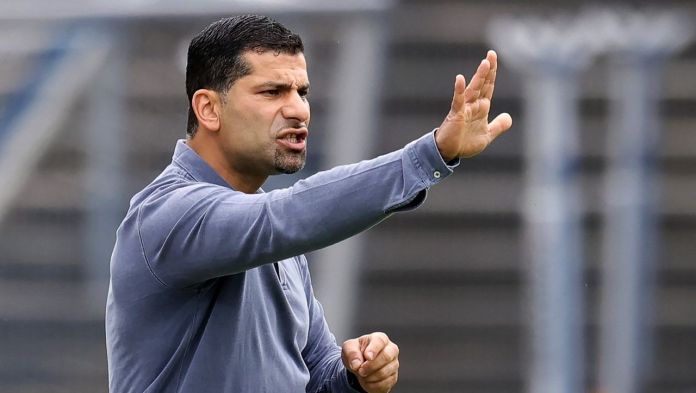 FC Schalke 04 is still popular, and rightly so, as a “big” and “emotional” club. It is also a “buddies and painters club”. Some insist on tradition, some can no longer hear it. Dimitrios Grammozis made a change in the wording on Wednesday. The new coach said when he introduced that Schalke was “not exactly the Tiki-Taka club.”
No, it really isn’t. The FC Schalke 04 rumbled with amazing consistency to the last place in the Bundesliga. Grammozis is seen as a coach who should lead the club to the second division with decency, especially without harming himself, as he is trusted to lead Schalke back to the top immediately.

So it would have been interesting to hear from him a plan that goes beyond the next game. But his plan, just like that of the new sports director Peter Knäbel, was to only allow insight until the next game. “My approach is clearly Mainz 05,” said Grammozis. The table penultimate will come to the Gelsenkirchen Arena on Friday.

“If you are convinced of the bride”

There have been so many performances by Schalke coaches in the past few years that astonishingly, almost every start has stuck with a saying. “Let me do it,” Manuel Baum said at the end of September and then quickly showed that they shouldn’t have let him do it. Dimitrios Grammozis was also on the shortlist at the time, but the sports director Jochen Schneider, who has since been released, opted for Baum. Shortly before Christmas, Christian Gross was chosen, and Grammozis failed again. “Whenever it didn’t work out, it spurred me on more,” said the 42-year-old Grammozis, who grew up in Velbert on the southern edge of the Ruhr area.

Then the sentence that will make it into your memory fell: “It is important that you stick with it when you are convinced of the bride.”

Grammozis played professional football from 1996 to 2013, among others at Hamburger SV, 1. FC Kaiserslautern and 1. FC Köln. When he then seamlessly entered coaching life, he returned to VfL Bochum close to home. He commuted between youth and senior citizens, between assistant and boss.

He only became head of a professional team in February 2019 at SV Darmstadt 98 in the second division. It was a pretty successful time, especially after it had been determined that it would end again in the summer of 2020. Grammozis turned down a contract offer from the »lilies«. Others would have left that with the same vita in order to stay safely in the carousel.

Grammozis has its own head, as it is called in the Ruhr area. This is also what experienced coaches say, who have already watched his way at VfL Bochum. He is technically excellent without placing the technical aspect in the foreground. He comes more from football, which means that he can also have something rough and rustic.

One of Grammozis’ strengths should be to have access to everyone in the squad. That would be important, especially in the case of Schalke, if it were true. “The best variant” is how Peter Knäbel called the new trainer. He certainly did not sharpen his profile with this personality, because Grammozis was an idea that Jochen Schneider already had. Knäbel is said to have been a supporter of Grammozis in the first half of the season. Now that he’s in charge, his favorite has come out on top.

After the manpower was cut last Sunday, Knäbel was appointed by the director of the youth training center “until further notice” as the bearer of “overall sporting responsibility”. This is a useful description for the now, but in the morning it should be a clearly defined item that can also be found in the organization chart.

Knäbel could replace Jochen Schneider on the board. To do this, however, he would have to be appointed by the supervisory board, which could look very different in June after an election by the general meeting. Or is he going to be a sports director? Knäbel avoided answering, just as he refused to look into his plans. “Only Mainz is in focus and important.” The agreement with the trainer already had something of Tiki-Taka at that moment.

Tande: Ski jumper had to be put into a coma: wake-up...

“maischberger.die woche”: Spahn is preparing for a longer lockdown

After work victory in Ried: Breathe easy at Austria