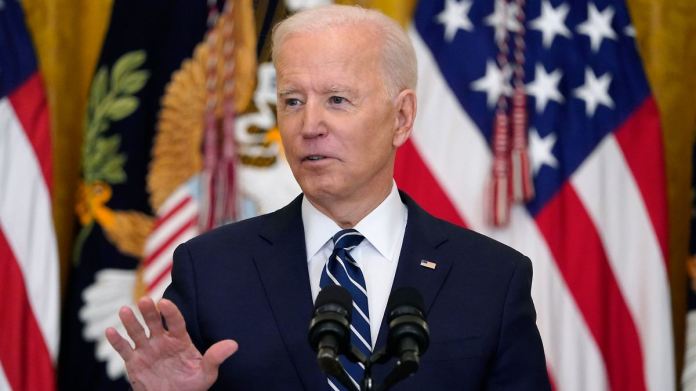 Gun law is a sensitive issue in the United States. Tighter controls are “a matter of timing,” but not a priority, President Biden said at his first press conference. Many are disappointed with his statement. A day later, the White House made it clear: Biden takes the issue seriously.
After the recent firearms attacks in the United States, US President Joe Biden continues to plan orders to tighten control over arms sales, according to the White House. White House spokeswoman Jen Psaki countered the impression that the issue was secondary to Biden. However, she could not give a time frame for measures.

Biden had said at his first formal press conference on Thursday that such orders were “a matter of timing”. However, priority is given to expanding the country’s infrastructure. Lobbyists for stricter gun controls had shown disappointment.

On Monday, a gunman in the state of Colorado killed ten people in a supermarket. A 21 year old suspect is on remand. The motive is unclear. According to the investigators on Friday, he had legally acquired his weapon. As recently as last Tuesday, eight people were shot dead in three massage parlors in and around Atlanta in the US state of Georgia. Six of them were Asian and seven were women. The white suspect named sex addiction and the aim of eradicating the “temptation” through massage parlors as the motive for the brutal attacks.

The attack fueled the US debate about growing hatred of Americans of Asian descent. There are calls for stricter gun laws after every major gun attack in the USA – but without any major success. The Democrats in the House of Representatives had recently started a new attempt to legally regulate that arms buyers are more strictly controlled. So far, however, it is not in sight that there will be the necessary majority in the Senate. Many Republicans are critical of stricter gun laws. The gun lobby is very strong in the United States.

First Swiss death after corona vaccination in Lucerne? It is...

This is what top managers at Deutsche Bahn and in local...

Crypto Market Report: Bitcoin, Ether & Co: This is how cryptocurrencies...