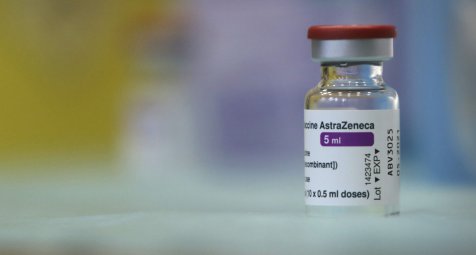 Hamburg / London – The vice-boss of Astrazeneca in Germany notes a “distortion of perception” of their own vaccine. “In Germany, the vaccine is mainly used by younger people, that is, employed people. They generally have stronger immune reactions and – unlike pensioners – can report sick at work, ”said Klaus Hinterding, German vice-head of the pharmaceutical company. “This has led to a distortion of perception in Germany.”

In many German regions, the drug from Astrazeneca, which was developed together with the University of Oxford, has been dumped in the past few days and weeks – also because many citizens do not take advantage of their vaccination offers. According to initial study data and reports, many had probably considered the drug to be significantly less effective or safe than the vaccines from Biontech or Moderna.

“I don’t even know whether something really went wrong,” said Hinterding, referring to the image problem. “There were an unbelievable number of figures going through the scientific literature and also through the daily press,” said the vice-boss. “The main thing was always that the vaccine was very effective in protecting against severe disease.”

Another reason for the large quantities of vaccine doses that are currently in German refrigerators is that in many places the second dose is set aside for a vaccination so that it is ready for the patient’s second appointment. Elsewhere, including in Great Britain, people also trust the supplies and vaccinate what is there.

Even if Astrazeneca did not want to rule out fluctuations in deliveries, Hinterding said: “I personally would not leave huge amounts of vaccine doses in the refrigerator.” However, there is no risk that the vaccine will actually expire. At refrigerator temperatures, the vaccine can be kept for up to six months.

According to new study data from England and Scotland, which clearly demonstrate the effectiveness and safety of the vaccine even in older people, the Standing Vaccination Commission (STIKO) has now also recommended Astrazeneca’s agent for people over 65 years of age. In many other countries, all age groups were vaccinated with it right from the start.

The new release could ease the vaccination backlog in Germany. “I am convinced that it is developing in the right direction,” said Hinterding. “The vaccinations are the only way out of the pandemic. We can’t do it without the Astrazeneca vaccine. This knowledge will prevail. ”

This week, the delivery of 250,000 Astrazeneca vaccine doses from the EU to Australia was stopped for the first time. It was the first measure of its kind after the EU introduced export controls on vaccines to prevent the international community from being disadvantaged. However, Hinterding did not want to comment on applications for exports from the European Union and specifically promised delivery quantities. © dpa / aerzteblatt.de

The first storm of the year is imminent

Corona in Germany: “The personal responsibility so far has been enormous”...

There’s something on your ears – LS50 Collection available now