As the title suggests, there are indications that Battlefield 6 could have a setting between Russia and Asia. The idea for this is based on two teasers that we are all familiar with.

The first spoiler was in the tech demo that EA presented at the last E3 and EA Play. At the point where EA presented a rendered face to demonstrate the further development of the Frostbite Engine, a combination of numbers “50.28079” can be seen briefly on the forehead of the detailed face model.

The second spoiler can be seen on part of the Eidolon skin in Battlefield V, which can only be unlocked by solving a number of hidden challenges. On the belt of the outfit you can also see a number of Roman numerals “4728956473892531”.

If you interpret the numbers as GPS coordinates, both combinations lead to different locations in Kazakhstan. Kazakhstan is certainly a large country, but the likelihood that both coordinators will fall into the same country is, in spite of everything, very small.

Kazakhstan is a Central Asian country and a former Soviet republic. It extends from the Caspian Sea in the west to the Altai Mountains on its eastern border with China and Russia. The setting would be versatile in any case.

Admittedly, it all sounds hair-raising and has a catch, because based on the numbers, you can only theoretically read off the latitude. France, Poland, Russia, China, Germany and other countries would then also be on this. In the end, it might just have no meaning at all.

Battlefield V buy now: Battlefield V can be bought for PC, Playstation 4 and Xbox One at Amazon.de or for PC at Origin, Kinguin & MMOGA at the lowest price.

Corona in Berlin: The endurance test is yet to come

Be careful when sharing screens with zoom 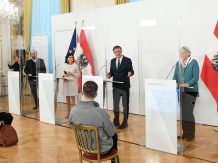 Jasmin Herren: “I would have reacted differently in Giulia’s place”