Where does Austria’s national football team really stand 64 days before the first European Championship game against North Macedonia? This question will be answered in today’s World Cup qualifier against Denmark (8.45 p.m., ORF one).

Since the (friendly) international matches against Germany and Brazil in 2018, you haven’t played against such a strong opponent. Twelfth place in the world rankings brought the Danes a place in Pot 1 at the draw. In reality, the Danes are currently among the top 10 in terms of performance.

The Austrian team is already “no losing”. Because a five-point deficit will be very difficult to make up against this opponent. Only winning the group would be enough to get promoted quickly. This part is the real “hardness test” for the FB selection. Even if a friendly against England is on the program just before the European Championship.

The line for FB team boss Franco Foda is narrow if the finish of the game against the Danes, who have been unbeaten in European and World Cup qualifiers since autumn 2016, should be a draw. Foda’s recipe: “We have to act compactly and have their wing players under control, there is a lot of work to do on our back defenders. We also have to develop our game on the offensive.”

LASK goalkeeper Alexander Schlager is probably back in goal. Gernot Trauner will only be an issue for central defense if team boss Foda sets up a three-way defense. More likely, however, is a 4-2-3-1 with Sasa Kalajdzic as the only tip.

The guests come to Vienna rested. With the exception of goalkeeper Kasper Schmeichel, the entire starting eleven were spared after the 2-0 win over Israel. The second set also managed an 8-0 victory over Moldova on Wednesday. That says a lot about Denmark’s quality.

The current FB captain David Alaba is looking forward to the duel: “We all love games like this. Maybe we are playing at such a level for games like this. Our starting position is okay, even if we missed points at 2-2 in Scotland to have.”

David Alaba has great respect for Christian Eriksen. “He and Torhter Kasper Schmeichel are already world-class.” However, Eriksen also has a low behind him.

Its market value has fallen significantly in the past few months. Since moving to Inter Milan last year, the 29-year-old has never really made it. After 51 goals in the English Premier League, he has only managed one goal in Italy.

The former Tottenham player has already been labeled a transfer flop, the problems with coach Antonio Conte were obvious. In the meantime, Eriksen (unusually defensive) is back in action more regularly. However, goals have not been achieved. Eriksen also only scored in one of his last five appearances for the national team. 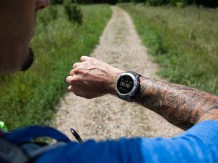 These are the latest smartwatch innovations

“Every ball is very important – but four times in a...

McDonald’s: Pokemon cards are used in happy meals in Germany