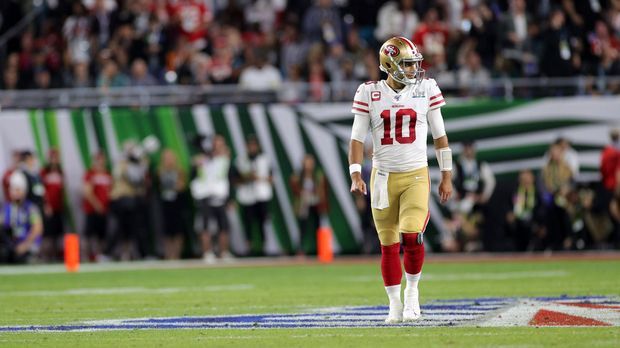 Munich / San Francisco – Around a month before the upcoming draft (April 29 to May 1, 2021, live on ProSiebenMAXX and ran.de), the San Francisco 49ers are trading in third place and are giving some future capital to the Miami Dolphins from.

Usually, such an exchange primarily implies an interest in one of the college quarterbacks available. Nevertheless, Jimmy Garoppolo, who already has a no-trade clause in his contract for 2021, should also be the playmaker in the Bay Area in the coming season.

“Jimmy will stay here. He’s our man again this year,” NFL insider Adam Schefter quotes an unspecified source on Twitter. In addition, the Super Bowl participant from last year should not have had a specific player in mind, but merely be satisfied with the various options offered by the trade.

NFL draft: who do the 49ers choose?

Still, the election of one of the hottest quarterback prospects this year is likely. While Trevor Lawrence is likely to be the first player to step off the board and join the Jacksonville Jaguars, there seems to be a lot to be left behind.

Should Zach Wilson not be elected by the New York Jets, the Brigham Young University quarterback could be a hot candidate for head coach Kyle Shanahan’s team. According to media reports, General Manager John Lynch traveled to Pro Day to convince himself of the qualities of the BYU athletes – and the 21-year-old was probably the main reason.

Through the trade, Justin Fields (Ohio State) and National Champion Mac Jones (Alabama) are also available with almost one hundred percent certainty, who also built a season behind Garoppolo and could take on the most important position in football in 2022.

Due to the swap, the future of the previous starter Jimmy Garoppolo is of course also the focus. The 29-year-old is considered a solid passer, but has so far not been able to establish himself as an elite quarterback in the NFL and has also repeatedly been thrown back from injuries. In 2018 Garoppolo played three games until he was canceled due to an injury, in 2020 there were six (1,096 passing yards, seven touchdowns, five interceptions).

This aspect in particular is likely to have often caused headaches for General Managers John Lynch and Shanahan. He was only able to start in all games in the Super Bowl season and despite reaching the finals he was not undisputed by fans and experts there either – to this day, the outstanding defense and the strong running game are the basis for the success of the 49ers.

So the 2021 season could be the last in which “Jimmy G” wears the 49ers’ jersey – but the trade has not reduced the chances that his successor will be on his back.