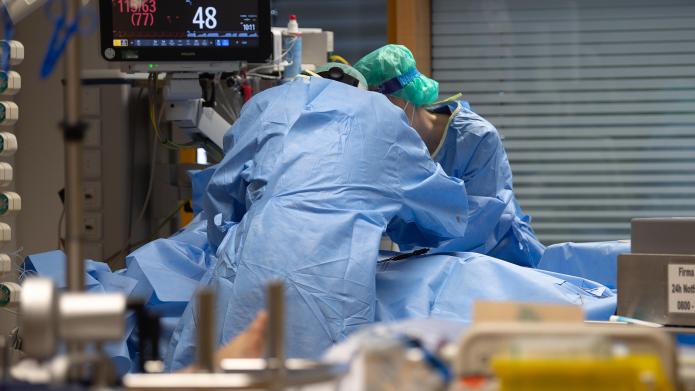 Janssens in the video: “I am sure that this is the wrong way”

The third corona wave is rolling and yet some federal states are taking an opening course – this causes horror among medical experts. Intensive care physician Prof. Dr. Uwe Janssens warns: “I am sure that this is the wrong way”. He explains why in the video.

+++ You can find all current information on the coronavirus in our live ticker on RTL.de +++

“The resolutions for model projects after Easter are completely inappropriate”

The president of the intensive care medicine society DGIIN, Christian Karagiannidis, is calling for a hard lockdown and immediate stop of all planned opening steps in view of the rapidly increasing number of infections. “The resolutions for model projects after Easter are completely inappropriate and must be withdrawn immediately by the federal and state governments,” Karagiannidis, who is also the scientific director of the Divi intensive register, told the Rheinische Post on Saturday.

“Mixture of hard lockdown, many vaccinations and tests”

“It takes a mixture of hard lockdown, many vaccinations and tests. This is the only way to prevent the intensive care units from overflowing,” he said. Such a lockdown must apply nationwide and last two weeks. “I ask politicians not to abandon hospital staff.” Other doctors and virologists had also criticized the opening course in some countries.

The SPD health expert Karl Lauterbach told the newspapers of the Funke media group: “It is very clear that we are growing exponentially and can reach daily numbers of 30,000, 40,000, 50,000 infected people within a short period of time.” Some other countries are therefore pulling the “emergency brake” and tightening measures again.

However, at the Prime Minister’s Conference at the beginning of the week, the federal and state governments decided that the states in “selected regions” may open individual areas of public life on a test basis in “temporary model projects”, “with strict protective measures and a test concept”. Several countries have announced that they will open several model regions at the same time. The Saarland even wants to open the whole country after Easter – so far without a time limit.

Prime Minister Tobias Hans (CDU) defends the decision: “We are a small country, our test infrastructure is well set up, and currently the infection rate is moderate – good prerequisites for doing this across the Saarland,” he told the “Bild” newspaper. “One year after the corona pandemic, we now have to think of more than just closing and restricting.” He added: “That is why we will expand the tests even further, accelerate vaccination and allow more freedom under strict hygiene requirements.” If “the number of infections increases exponentially, we will pull the emergency brake in good time”.

Rapid tests are not as certain as many believe

The Chairman of the Council of the Evangelical Church (EKD), Heinrich Bedford-Strohm, also advocates further easing of the corona protective measures. “Now the exhaustion of the people must also be taken into account through clever openings,” he told the editorial network Germany. With the vaccinations of the elderly, the rectification of vaccination and test problems and good organization, it should work to enable more people to meet again than before. And employer President Rainer Dulger told the “Heilbronner Voice” on Saturday: “It is about the understandable need for everything to normalize a little, here politics must show perspectives.”

In the meantime, however, there are strong doubts about the safety of the much-touted rapid tests. “Antigen tests are nowhere near as safe as you think,” Lauterbach told the Funke newspapers. Studies have shown: “If someone is really asymptomatic, the rapid test works in six out of ten positive cases. In four out of ten cases the test is negative.”

Bavaria’s Prime Minister Markus Söder (CSU), who wants to set up eight opening model regions, asks people at the same time to continue to adhere to the Corona rules at Easter. “In the end, civil disobedience does not help anyone – neither the individual nor everyone. We are a community of fate. Aid that some get is only there because others help finance it. That is why it is important that we uphold solidarity,” he said “Passauer Neuen Presse” and the “Donaukurier” on Saturday.