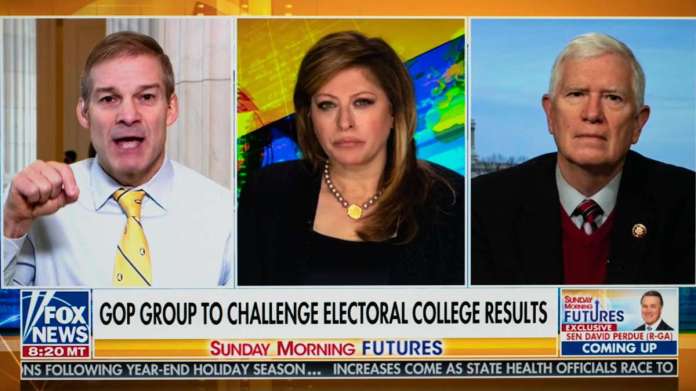 Despite his electoral failure, Donald Trump still has a lot of influence with the Republicans. Several of his supporters are running for the US Senate.

Washington – He just won’t let up. Donald Trump is influencing other Republican politicians with his claim that historic electoral fraud cost him the office in the 2020 US presidential election. A personality cult is developing around him, and the 2022 Senate elections in the USA will turn into a personal vengeance campaign. And an army is forming around the ex-president that wants to follow him into the election battles of the future. The term “electoral fraud” comes up again and again.

Mo Brooks: A supporter of Donald Trump is running for the US Senate

One of the key soldiers in Trump’s Republican Armed Forces: Alabama Congressman Mo Brooks. He had tried to block the confirmation of Trump’s successor, Joe Biden. Whose choice is based on fraud. At the rally on January 6th, which ended in the “storm on the Capitol”, he said to the assembled Trump supporters: “Today is the day when American patriots start jotting down names and kicking their asses.” His He is now trying to use comments on alleged electoral fraud at the beginning of the year as a stepping stone to higher office.

Brooks announced on Monday that it would run for the US Senate in Alabama. At the opening event of his election campaign, of course, he picked up a well-known lie. “In 2020 America suffered the worst voter fraud and election theft in history,” Brooks said, according to news channel CNN. No other candidate for the Senate has sided with Trump as strongly as he does. He blamed the lost US election in 2020 – as you know it – the “fake news media” and “radical socialists”. Trump thanked the commitment with ardent support.

Supporters of Donald Trump want to join the US Senate

All information about the 45th US President can be found in Trump News.

In addition to Mo Brooks, another foot soldier in Trump’s army is reaching for a seat in the Senate: Eric Greitens from Missouri is also trying to get a place in Washington. He was previously governor of Missouri and resigned after a year in office in 2018 following an investigation into him. Greitens was a member of the Navy Seals and likes to portray himself as a veteran. “The people of Missouri need a fighter in the US Senate,” he justified his candidacy on Fox News. He wanted to “defend President Trump’s America First policy” and “protect the people of Missouri from Joe Biden, Nancy Pelosi and Chuck Schumer’s radical, left-wing agenda”.

The seats of incumbents in the Senate who voted for impeachment against Trump in the impeachment process are becoming targets for Republicans loyal to Trump. Trump’s troops are also forming in Ohio. There Josh Mandel got ready to run for the Senate, at the opening event of his election campaign he reiterated the conspiracy theory of the “big lie”: “I think that over time studies will come out that prove widespread fraud,” said Almond to the television station WKYC. “But I think if we look back on that election, in large part we will see that it was stolen by President Trump.”

Lara Trump is also toying with candidacy for the US Senate

Another protagonist from Donald Trump’s immediate environment probably throws her hat into the ring. Lara Trump has been toying with the Senate seat in North Carolina for a long time. The wife of Eric Trump and thus the daughter-in-law of the former US President has not yet officially confirmed her candidacy, but Donald himself announced to Lara in Mar-a-Lago: “I heard you are running for the US Senate?”

Future of Republicans in the US: How Big is Donald Trump’s Influence?

The Republican Party could transform after the 2022 mid-term elections. The radical Trump supporters: inside the “Grand Old Party” remain true to their idol. Some Republicans are becoming increasingly obsessed with Make America Great Again topics. According to CNN, the visit of Kevin McCarthy, Republican minority leader in the House of Representatives, to the Trump Bastion Mar-a-Lago earlier this year is indicative of this change.

However, this strategy could cost the Republicans votes. The Senate seats in Missouri are highly competitive. A wing dispute within the party between several conservative candidates could scare away voters. Likewise a too radical candidate: in, who could drive voters from the conservative center into the arms of the Democrats – this happened in 2012 with the candidacy of the hardliner Todd Akins. The Republican lost the Senate election against his Democratic rival candidate after remarks about the morning-after pill among rape victims.

Trump supporters strive into the political base of the United States, his soldiers prepare for a new attack on established politics. Should “Trumpism” establish itself and Trump demonstrate his power within the Republican Party in the 2022 elections, he would have a good basis for a presidential candidacy in 2024. In addition, then at the latest it will prove how great Trump’s influence in the party can remain in the long term – and whether Republicans who reject the ex-president and his political style will still have a chance of high political office. (Sebastian Richter)

Corona in Germany: caught in the spiral of exhaustion

CORONAVIRUS: St. Gallen government is irritated: Austria only recognizes its own...