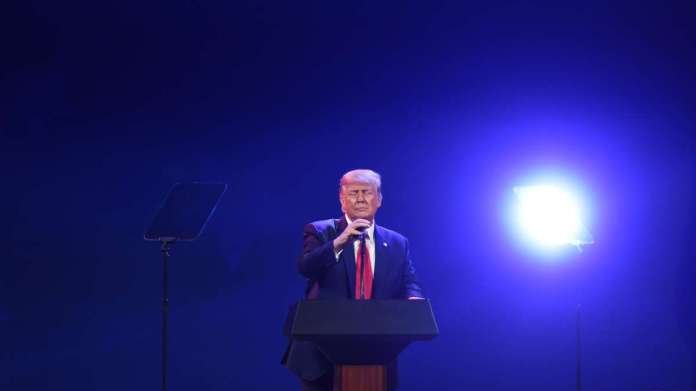 Donald Trump is currently in involuntary retirement. In a TV interview, he doesn’t skimp on criticism of the new government.

Palm Beach / Washington, DC – About a month and a half ago Donald Trump Unintentionally promoted from his presidency – for him it came suddenly, he still believes in it, the rightful winner of the 2020 US election to be. He could use the free time he gained for many things, such as playing golf. According to the Trump Golf Count portal, he spent 298 days on the golf course during his time as US President.

But it is well known that you always want what you can’t have. And so wishes Donald Trump his time as president of the USA back.

In an interview with the broadcaster “Newsmax“Answered Trump when asked if he missed being president:” I do “. And immediately afterwards he took the opportunity to take the new government under Joe Biden to criticize on television. “And we were ready for a deal with Iran, we were ready – it would have been a great deal. I’ve seen the deal you’re talking about now – it’s a disaster. ” Donald Trump spoke in the present tense as if he were still in office, how he was withdrawing the military from the Middle East and bringing numerous soldiers home.

Donald Trump also criticized the US spending a fortune to protect other “rich” countries that did not appreciate it and did not pay for it. “We pay for it,” said Trump. “Everything went great and then we had a gross, and frankly, a phony choice and it was stolen. And it’s a shame, but you’ll see what happens. ”

For the Election 2024 said Donald Trump “A lot of great votes” ahead. In the past, he had indicated that he could imagine running again in 2024. While Trump was giving an eulogy for his services, presenter Greg Kelly tried unsuccessfully to speak on several occasions.

Finally Kelly came through and asked Trumpwhether, in retrospect, he wished he had struck a different note in some situations or wanted to do it differently the next time. With his answer, he again proved that the ex-president is not exactly known for self-critical reflection. “Maybe, but I’m not sure if I could have been elected then because I fought a lot. I fought against the fake news, “said Trump. Joe Biden is treated differently by the media; Trump indicated that he had been asked tougher questions than Biden. “At least keep it the same,” he said. He could imagine, however, that you could strike a softer note if you had already been chosen.

Donald Trump Furthermore, he insisted on seeing his rival in the US election 2016 to target: “Do you know who the angryest person in this country is? Hillary Clinton. Because she says, ‘Why didn’t they do this for me? Why didn’t they create voices in Michigan? Why didn’t they create votes in some of these states? ‘”According to Trump’s theory, the 2016 election was not betrayed because his team was much better positioned for 2020. That’s why he “allegedly lost”. He and many others knew, however, that this was not the truth. Even four months after the 2020 US election Donald Trump has not yet accepted his election defeat. (Ines Alberti)

New sensor system from Ford: No more fogging of the windscreen

“Doesn’t anyone notice that?”: ProSieben outraged “Beat the Star” viewers

Erik lies to his daughter Merle