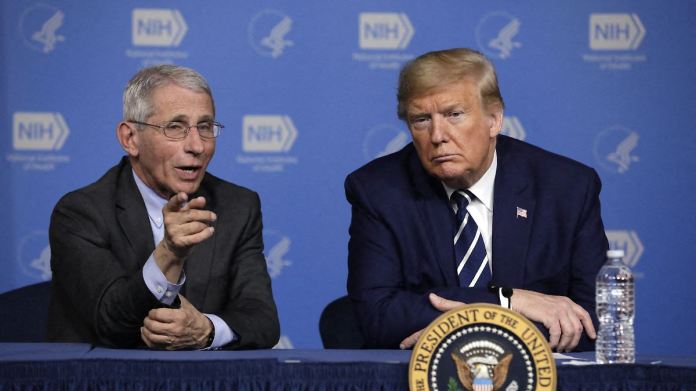 “Done the opposite of that”
Trump: I ignored Fauci’s advice on Corona

In the fight against the corona pandemic, the former US President Trump often did not look good. Now he boasts in an interview that he has not followed the advice of one of the top experts in the USA. Rather, he even did the opposite of it.
The USA is one of the countries hardest hit by the corona pandemic: the virus has claimed more than half a million deaths in the country. Former US President Donald Trump, whose last year in office was shaped by the pandemic, now boasted on the US television station Fox News that he had advised the US epidemic expert and head of the National Institute for Allergies and Infectious Diseases in the fight against Corona (NIAID), Anthony Fauci, as reported by several US media.

Trump himself had, among other things, brought the injection of disinfectants into play as a possible corona healing method or advertised the malaria drug hydroxychloroquine as a corona drug, although its effectiveness had not been proven. The ex-president admitted on the program “The Ingraham Angel” that he had largely ignored the health expert Fauci and had done the opposite of what he had suggested.

Trump had already made similar derogatory comments about Fauci elsewhere, for example in a podcast by Fox News journalist Lisa Boothe: “I listened to him, but I didn’t do what he said,” said Trump. He also complained about how long Fauci has served in his position. “I didn’t really promote him,” said Trump. “He’s been there for 40 years. He’s been there forever.”

Fauci had worked under various US presidents before Trump. During Trump’s tenure, the immunologist had a lot to do with keeping a president in check, who sometimes contributed to the spread of misinformation about the coronavirus with tweets or other public statements. After Trump’s departure, Fauci was visibly relieved. Fauci is currently advising President Joe Biden on the crisis.

Prince Andrew on Epstein’s island instead of on family vacation

These are the party rules for New Year’s Eve – Coronavirus...

Football: Milan remain ahead after the 3-0 win against Atalanta Bergamo

Gabriel Clemens in arrears – can he turn things around?