That Doom adulation from Cramer again

I have to admit: I’m running out of ideas for a third hymn of praise for the fantastic Doom Eternal. So if you really want to know why I consider the second part of id’s Doom reboot from 2020 to be the best shooter of its kind and one of the best shooters of our generation, just read my review. Or the first part of the standalone expansion The Ancient Gods.

The Ancient Gods, Part 2 closes the storyline of Doom Eternal with a duel against the Prince of Hell in person, which was revealed shortly before the credits of the first DLC. On the way to the Dark Lord, the Slayer slaughters his way over the conquered earth, shoots his way through hordes of demons to the world spear and, with the active support of the Sentinel armies, dismantles the deepest circle of hell. All of this is staged in an incredibly epic Avengers style.

The armored baron is a new and tough enemy.

It’s nice that my biggest point of criticism has actually been addressed: In the second section of the DLC, I not only meet new enemies with the Armored Baron, soldiers with indestructible shields and stone imps, but also get another melee weapon with the Sentinel hammer that fits seamlessly into the arsenal of Glory Kills, Flamethrowers and Chainsaws. So I can stun enemy hordes with the Hllen-Mjlnir and, in combination with the grenade launcher, even gain additional ammunition, armor or life energy from them.

In addition, the hammer extends the duration of the vulnerability of marauders and armored barons, who also have to be shot at a weak point in response to a green timing hint so that their armor can briefly open.

More mechanics for the battle 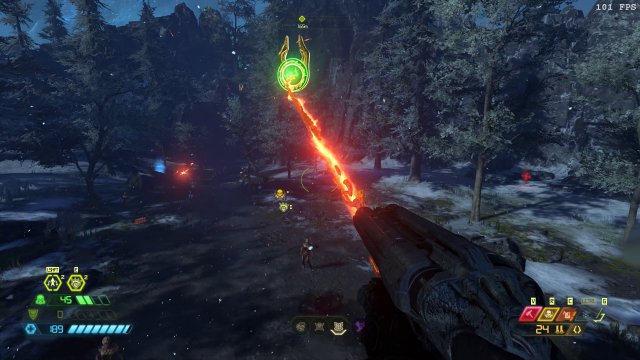 It can now be swung with a meat hook.

But that doesn’t stop there with new mechanics: There are two more, fresh enemy critters that bring more tactics to the battlefield. There are now zombies who amplify all surrounding demons with their cry of pain – so it is important to avoid damage to these individual enemies as long as Dread Knights, Arachnotrons and Co. are in the vicinity. In addition, the Slayer can inflict a curse on himself with the Cursed Prowler, which not only severely restricts his vision, but also his mobility and which is only lifted when the nimble bastard is executed with a blood blow.

Together with the demons possessed by ghosts from the first DLC and the already extensive battle formula of Doom Eternal, even more complex, even more brutal and even more varied arena battles unfold, which double underline the incredibly high level of this exceptional shooter.

Another person from Olfen died of Corona

Chris DiDomenico is attacked by Ronalds Kenins after the game