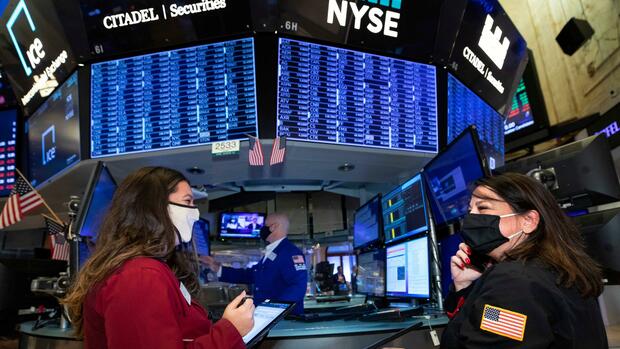 Traders talk on the trading floor.

New York At the start of the trading week before Easter, US investors held back on stocks. The US standard value index Dow Jones closed on Monday a moderate 0.3 percent higher to 33,171 points. The technology-heavy Nasdaq, however, lost 0.6 percent to 13,059 points. The broad S&P 500 lost 0.1 percent to 3971 points.

Investors were worried about the troubled situation of the US hedge fund Archegos Capital. According to the Bloomberg news agency, Archegos had to sell more than $ 20 billion worth of shares on Friday due to margin calls. The Wall Street Journal even reported sales of $ 30 billion. According to insiders, the default is also costly for some major banks.

The problems of the hedge fund threaten the Swiss Credit Suisse and the Japanese investment bank Nomura with losses of billions. The news caused massive uncertainty among investors on the stock exchange. Credit Suisse shares plummeted 14 percent in Zurich, while Nomura shares plummeted 16 percent in Tokyo. The second-largest Swiss financial institution said that a major hedge fund had failed to make additional contributions – so-called margin calls. Since the investor did not inject any money, Credit Suisse and other banks are in the process of liquidating securities positions.

In the US, shares in Morgan Stanley fell about three percent after a report by the Financial Times on massive share sales. Bank of America, Citigroup, JPMorgan Chase, Goldman Sachs and Wells Fargo, which lost up to 3.3 percent, also came under pressure. Investors feared that more share sales were imminent.

“This incident reminded markets of the dark side of leverage and likely resulted in some market participants reducing their exposure to near record highs in order to avoid serious losses should sales expand,” said Marios Hadjikyriacos, investment analyst at online Broker XM.

Glossary: ​​The most important information about hedge funds

In principle, hedge funds work like traditional investment funds. You collect money from investors and try to invest the capital as profitably as possible. Ideally, however, these returns are as independent of the fluctuations in the stock and bond markets as possible in order to achieve protection.

The funds enter into economic bets, for example, or they bet on price fluctuations in so-called special situations such as mergers and takeovers. The species of hedge funds also include fully automated trading systems that recognize and exploit patterns in the markets with the help of artificial intelligence.

The industry’s assets under management grew by a record $ 290 billion in the fourth quarter of 2020, according to data from Hedge Fund Research (HFR). This increased the inventory to a total of $ 3.6 trillion, which is also a high.

When trading certain financial products, it is not necessary for professional investors such as hedge funds to actually deposit the entire amount that is being traded in their trading account. A so-called margin, which is only a fraction of the actual volume, is sufficient.

If the markets turn, however, there is a “margin call”. It paraphrases the warning a trader receives if the capital in his account has fallen below the minimum required to hold the position open. He then has to inject more money or liquidate his positions.

This can lead to self-reinforcing price movements that put a strain on the entire market. For example, when hedge funds get caught on the wrong foot and have to sell profitable positions on a large scale to meet margin calls.

Experts speak of a “short squeeze” when investors who have speculated about a short sale have to subsequently stock up on company paper in order to secure their position.

Such cover purchases can drive prices up rapidly and trigger a chain reaction. This can happen if many short sellers are liquidating their bets at the same time, or more stocks have been sold short than are in circulation at all.

The best-known example in Germany of a short squeeze was the capricious price of VW during the failed takeover by Porsche in 2008. Because only a few shares were freely tradable, the price skyrocketed within a few days. Betting on a short squeeze is highly speculative.

Meanwhile, Boeing shares rose 2.3 percent after a major order. Southwest Airlines ordered 100 737 MAX planes, encouraging investors to join the Airbus rival. The first machines are said to be delivered in 2022.

Bitcoin was also in demand. The oldest and most important cyber motto again targeted the $ 60,000 mark and rose by up to eight percent to $ 58,400. The fact that the credit card provider Visa opened another door to the use of cryptocurrencies in general payment transactions was well received by the market. The US company announced on Monday that it would in future accept the use of the cyber currency USD Coin for payments.

The oil price initially fell slightly after the giant container ship “Ever Given”, which ran aground in the Suez Canal and which had blocked the important shipping route for around a week, was released. The Brent variety from the North Sea then showed little change at 64.62 dollars per barrel (159 liters). The canal operator SCA announced on Monday that traffic in the waterway, which is immensely important for global shipping, would be resumed. However, the disruptions in the global shipping industry could take weeks or possibly months to be resolved, leading container shipping companies said.

“I was hit on for a couple of years”

Corona and Trump screw up the start of a “great” year

“Not easy to move my hands”

Sexy smock! This is what Joey Heindle looks like as...