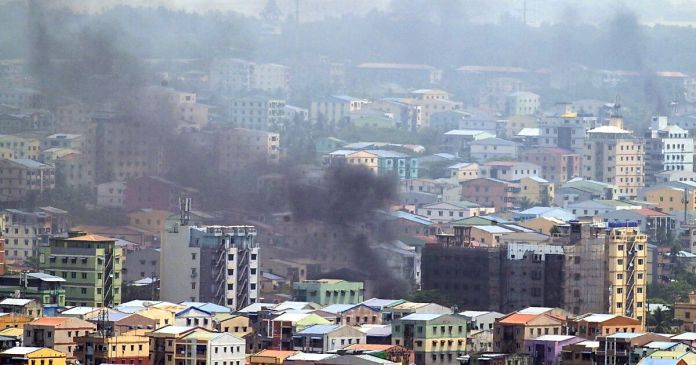 According to the Myanmar Now news portal, at least 24 people died in Yangon. The new protests took place on Army Day, which the military marked with a parade in the capital, Naypyidaw.

The European Union spoke of a “day of terror and dishonor” on social media. Killing unarmed civilians and children is inexcusable. The US ambassador to Myanmar also condemned the military’s actions: “The bloodshed is horrific,” wrote Thomas Vajda on Twitter. The Myanmar military has brought shame on itself by shooting at “unarmed civilians,” wrote British Ambassador Dan Chugg on Twitter.

Threats against protesters on TV

The day before, there had been a threat against the demonstrators on state television. “You should learn that you run the risk of being shot in the head and back,” said MRTV. Recent deaths have shown that these threats should be taken more than seriously. A 21-year-old civilian named Chit Bo Nyein is believed to be among the victims in Yangon. Nyein helped out in his family’s tea shop when he was shot, said a family member of the German press agency.

Protests after the military coup

On Saturday, the IG Authors authors and the Graz Authors Authors’ Assembly spoke up in Austria. Its members remembered the two poets killed in Myanmar, K Za Win and Kyi Lin Aye. Another poet, Maung Yu Py, born in 1981, was arrested and imprisoned on March 9th. He is said to have been beaten and mistreated. He faces two years in prison. Apparently, Maung Yu Py was not among the 600 people last released.

Tempo 40 on the most important streets in downtown Frankfurt

Week start with snow and slippery in Berlin and Brandenburg

Because of Corona: “Christmas lockdown” at Berlin’s courts | Regional