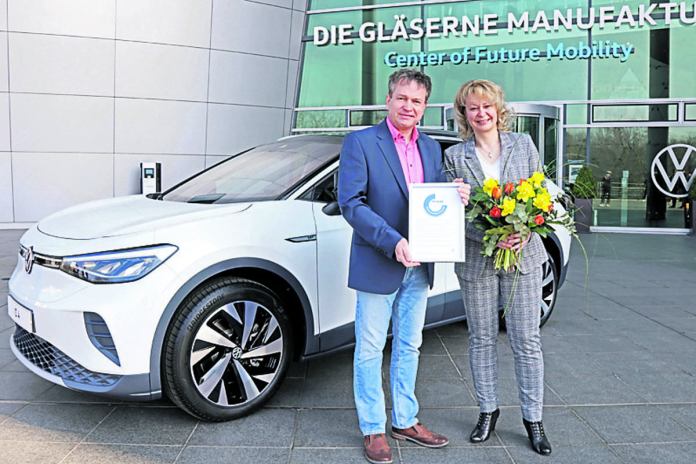 The first customers Jacqueline Heyer-Mertens and Mario Heyer from Suhl treated themselves to a trip to Dresden yesterday to pick up their new electric car.

Dresden / Zwickau – For this new member of the family, you like to drive a few kilometers further. The first customers Jacqueline Heyer-Mertens and Mario Heyer from Suhl, for example, have one Dresden-Trip granted to her new E-Auto Pick up at the Transparent Factory. The sedan is built in Zwickau.

The Heyers car is one of two ID.4s worldwide that were handed over to customers yesterday at the VW headquarters in Wolfsburg and just in Dresden.

VW Sachsen thus took the second step into the future of electric power after the start of series production of the somewhat smaller brother ID.3.

This also closes a small circle for the couple from Suhl: They already have an ID.3, just like the first ID.4 customer in Wolfsburg.

The larger electric VW comes off the assembly line exclusively in Zwickau and two Chinese plants.

So far, according to the group, there have been 23,500 pre-orders. One reason for the factory in Zwickau to also introduce a third shift on the second assembly line.

But why the handover in Dresden?

“In addition to the Wolfsburg Autostadt, the Transparent Factory in downtown Dresden has become the second delivery location for e-cars,” explains VW Sachsen.

“It is a production facility, a magnet for visitors, an event location, testing laboratory and delivery center.” From now on also for the ID.4.

It is available from 36,900 euros (basic model). 9,000 euros in government grants can significantly lower the purchase price.

VACCINE – "AMERICA FIRST": Emergency approval in the USA for the...

Freiburg wins and mixes up races for the European Cup

Fear of mutations is growing – important corona indicator has risen

Nostalgic on the move: classic car sharing as a business model...

Protective equipment “Made in Europe” required

Sluggish Covax initiative: WHO calls for vaccine for poor countries