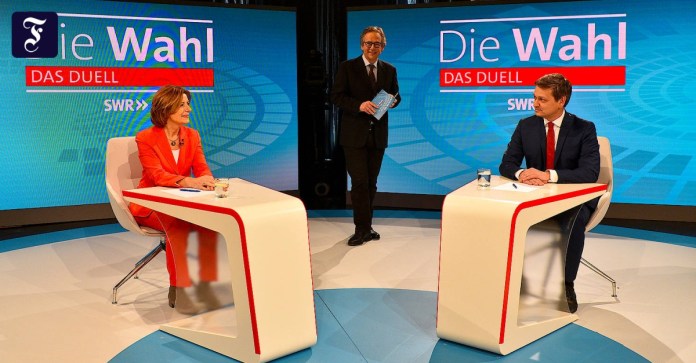 In Rhineland-Palatinate, for the first time in a long time, the ruling SPD is in the polls before the CDU: The Social Democrats would receive 33 percent, if there were state elections next Sunday, and only 29 percent the CDU. Since the state elections are already on the Sunday after next, the television duel between Prime Minister Malu Dreyer (SPD) and her challenger Christian Baldauf (CDU) focused on the question of how the latter deals with it: he switches to attack, finally also against Dreyer himself, he always spared before – probably out of consideration for their high approval rates?

Political correspondent for Hesse, Rhineland-Palatinate and Saarland based in Wiesbaden.

For Rhineland-Palatinate conditions, it was a biting duel that Dreyer and Baldauf delivered on Friday evening in the SWR. Baldauf accused Dreyer of a “facade and symbol policy”, Dreyer criticized Baldauf as changeable. In terms of content, it was about different policy areas, almost always about the pandemic and its consequences.

Soon he had to justify himself

When it came to Corona, Dreyer knew how to score at the beginning by referring to what had been achieved. Rhineland-Palatinate is the frontrunner in the state comparison when it comes to vaccination, and the incidence has been below 50 for days, as is otherwise only in Schleswig-Holstein. The country is doing well, said Dreyer, the openings are “responsible”, and a test infrastructure will be opened on Monday.

Soon, in turn, he had to justify his recently made statement that there was “vaccination chaos” in the country and that he had described the Rhineland-Palatinate vaccination strategy as “extremely dangerous”. The statements have to be “sorted”, said Baldauf on Friday evening, at the time vaccination appointments had been postponed and the state government had “miscalculated” the vaccination doses.

“The success speaks for itself”

Dreyer contradicted this. “The success proves us right,” said the Prime Minister. Soon she accused changeliness, he acted “like that”. Later, as is often the case in election campaigns, she referred to the companies in the country that were very present in the pandemic – such as Biontech.

Dreyer has been ruling in a traffic light coalition with the FDP and the Greens since 2016. The two small parties can improve in the most recent surveys compared to the result of 2016, the Greens significantly, they currently stand at 11 percent (2016: 5.3), the FDP somewhat, it stands at 7 percent (2016: 6.2 ). As things stand at the moment, the traffic light coalition would emerge stronger from the election. The CDU, which two years ago was still 38 percent in the surveys in the country, recently slipped below the national average.

It is true that the government’s balance sheet is mixed: Schools are crunching due to the absence of lessons and a lack of digitization; the municipalities in the country are the most heavily indebted; officials were illegally promoted to state ministries. But all that had counted little in this election campaign, Corona superimposed everything.

So now when it came to the subject of economics. Neither Dreyer nor Baldauf could score here. The situation was “gloomy”, said Dreyer, companies are fighting for survival, but also because of the measures taken, she is confident “that there will be an upswing again”.

Baldauf then accused her of “a lot of facade and symbolic politics” and painted the picture of an economically starving country: The economy was “completely on the wall”, the measures of the state government were inadequate, for example, inner cities needed to be promoted “but not only that five big “. Dreyer replied: “We live here in different federal states.”

He scored well on the subject of education

Baldauf was more likely to score points in the areas of local finance and education that are important in the state. The state government was recently obliged by the state constitutional court to redesign the municipal financial equalization system; the previous one is therefore unconstitutional. Dreyer soon accused of insufficiently financing the services of the municipalities.

On the subject of education, he criticized the state government was responsible for an “educational chaos”, a digital offensive was necessary with “laptops and Ipads for everyone”, with IT specialists on site and ventilation devices, and a digital minister was needed. Dreyer remained vague in her answer, on the one hand she referred to the digital “school platform” with which the country is well positioned for the future, on the other hand she said that there are still schools without WiFi, but that “does not depend on the money”.

When it comes to climate protection, on the other hand, Baldauf was on the defensive. Dreyer wants to make Rhineland-Palatinate climate-neutral by 2040, which requires a lot of renewable energies and also wind power – with the latter there should be “no taboo in our forests,” she said now. Baldauf, who had recently increasingly focused on green issues and had once taken action against wind turbines himself, remained vague on the subject. He wanted to bring agriculture, the environment and consumers together, said the Christian Democrat, and that needed “good ideas”. He left open which could be. Dreyer criticized that Baldauf had not given any information about how he imagines the fight against climate change.

The format was clouded by the length of the replies from Dreyer and Baldauf. The moderator, SWR editor-in-chief Fritz Frey, seldom followed up and never interrupted. In the end, Dreyer had spoken for 25 minutes, Baldauf only 20. It remains to be seen how useful such a format is at the current time in the election campaign marked by the pandemic. In Rhineland-Palatinate, voters have been able to vote by postal vote since the beginning of February. In Mainz, some assume that the majority did so at the end of February.

NDR distances itself from the documentary “Lovemobil”

Cruciate ligament tear in training – early end of season for...

Berlin & Brandenburg: After the first injection against Corona: 101-year-old is...