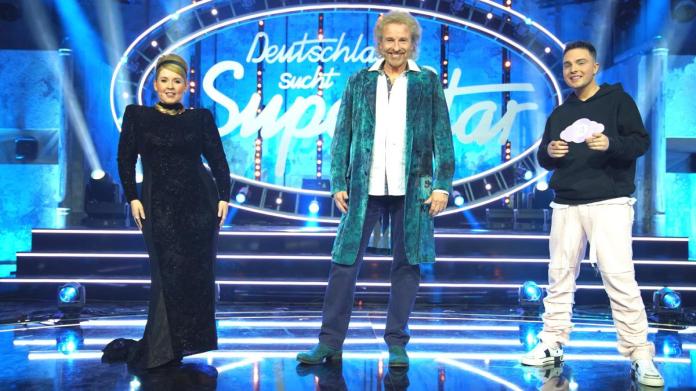 Thomas Gottschalk replaces Dieter Bohlen in “DSDS” for the first time. He greets the audience in the old “Wetten, dass …?” Manner. The ex-head of the jury, who is on sick leave, reports on Instagram almost at the same time – and looks quite fit.

VFrom grumbling pop titans to good-humored show dinosaurs: Thomas Gottschalk has for the first time replaced Dieter Bohlen as a juror for “Deutschland sucht den Superstar”. As usual fashionably chic, in a dark turquoise velvet coat, Gottschalk greeted the RTL viewers on Saturday in the old “Wetten, dass ..?” Manner. “Live TV on Saturday evening – that’s just made for me. I also feel at home, ”said the 70-year-old at the beginning.

Then he left the stage to presenter Oliver Geißen and sat on the jury between singer Maite Kelly and social media star Mike Singer.

“Titans can fall too, and that happened to Dieter. Of course we wish him to get up again quickly. Get well soon, “said Gottschalk about the prevented” DSDS “primeval rock. Bohlen had surprisingly called in sick a few days ago. After almost 20 years, his time at the long-running casting show ends without a proper farewell.

This year RTL wasn’t very lucky with its jurors anyway. Shortly before the start of the season, pop singer Michael Wendler switched to the conspiracy industry and was cut out of the already recorded programs. Then the plank-off, which apparently hit him hard.

In any case, the music producer commented on his separation from RTL for the first time a few minutes before the start of the live show. “I got a lot of offers, of course, and of course you have to look a bit at what you are doing now,” he said in an Instagram video in which he looked very fit. He is very satisfied with the current situation. “I have big plans and you will hear from me.”

The big TV stage later belonged to Gottschalk, which Alphatier Bohlen may well have worried. The two fight verbally in public over and over again. In 2012 both sat on the jury for the “Supertalent”, which didn’t work out particularly well. “All in all, I see my main job today as encouraging people and explaining what to expect. Because we live in a phase where there is a lot of grumbling, ”said Gottschalk about the jury job.

That could have been a swipe at Bohlen, who was notorious for his often bitter sayings. “Show-Titan” Gottschalk mastered his new task with the usual routine and humor. Regarding the unadorned industrial hall from which the first live show was broadcast after the episodes recorded in Mykonos in autumn, he said: “You sat on the Mediterranean with Dieter, you dragged me to the workshop in Duisburg. That’s not exactly nice either. “

Christian Gross is apparently the new coach of FC Schalke 04

Corona has taken the confidence of Austrians

Sabine Schmitz died at the age of 51

Looking forward to 2021: PS5 delivery bottleneck should be over soon

Great Britain and the EU: separated from now on

GP76 and GP66 Leopard expand the range from MSI