A year after her retirement from the royal family, Meghan faces allegations from her former employees. Prince Harry’s wife rejects the allegations. Now the British royal family is reacting.

Shortly before the publication of the interview with Oprah Winfrey on Sunday evening, former employees want to tell their very own version of Duchess Meghan. To do this, they now sought a conversation with the British daily newspaper “The Times”.

According to unnamed employees, the 39-year-old is said to have bullied two palace employees so much that they felt compelled to quit their job with the British royals. Prince Harry’s wife is said to have “expelled two personal assistants from the royal environment”.

In addition, she is said to have “undermined” the trust of a third employee. It felt like “emotional violence and manipulation”, which could also be called “bullying”. Specific examples of Meghan’s alleged behavior are not given.

“We are clearly very concerned about the allegations”

Now Buckingham Palace has also reacted. According to the announcement, the British royal family will “investigate allegations of bullying against the Duchess of Sussex,” as reported by the Guardian, among others. “We are clearly very concerned about the allegations in The Times,” said a palace spokesman, adding, “Accordingly, our human resources department is investigating the circumstances described in the article. Staff involved at this point, including those who have left the household , are invited to participate to see if lessons can be learned. ”

The report goes on to quote from the statement, which states: “The royal household has had a policy of dignity at work for a number of years and does not and will not tolerate bullying or harassment in the workplace.”

“She was bullied in the past”

Meghan had already commented on the allegations from 2018, which are now loud. A spokesman for the Duchess announced that she was “sad”. “Especially since she herself is someone who has been bullied in the past and is very committed to supporting those who have also endured pain and trauma,” a statement said. Meghan is “determined to continue her work to build compassion worldwide, and she will continue to strive to set an example of what is right and what is good,” said the spokesman.

The article was published a few days before the Oprah Winfrey interview aired. In the “intimate conversation” with the talk master topics such as her entry into life as a royal at the time, her marriage to Harry, her motherhood and her charitable work are addressed. In addition, the audience should learn in the interview how life feels under the strong public pressure for Meghan and how she deals with it. 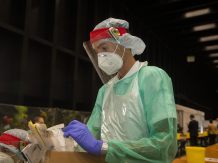