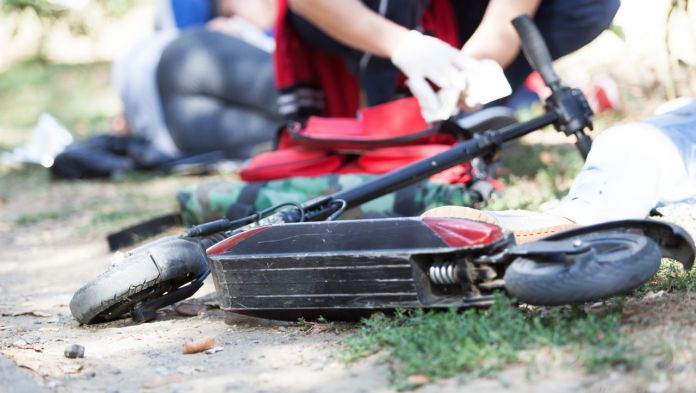 The most common causes were high speed and alcohol: In 2155 accidents with e-scooters in Germany, almost 2300 people were injured or killed last year.

The police registered five fatal accidents, 386 people were seriously injured, in 1907 slightly, as the Federal Statistical Office announced on Friday in Wiesbaden, citing preliminary figures. More than 80 percent of the casualties were on one of the small scooters, the rest were pedestrians or cyclists.

Last year the police registered a total of 264,000 accidents in road traffic with personal injury, of which 0.8 percent were accounted for by those with e-scooters. The numbers for 2020 are meaningful to a limited extent, as the providers have since limited or completely suspended their operations due to the corona pandemic. The statistics are also the first to show an entire year.
In almost three out of four accidents (around 72 percent) with e-scooters, the driver of the electric scooter was primarily responsible. For example, they had lost control of their vehicle. According to the police, the most common cause, at 18.3 percent, was alcohol consumption. For cyclists, the value was around seven percent. The scooter drivers also often used the road or sidewalks improperly or were traveling too fast.
Accidents mostly happened with younger people at the handlebars: 76 percent were younger than 45 years, just under 34 percent younger than 25 years. Only around seven percent were older than 65 years. In 918 of the 2155 accidents with personal injury, there was no opponent, according to the information, three of the five drivers killed died in such a solo accident. A good third of the casualties were injured in a collision with a car.

The small scooters have been approved for road traffic in Germany since June 2019. From the age of 14 you can drive them without a test – on the bike path. If this is missing, the vehicles with a maximum speed of 20 kilometers per hour must use the road. They may only be occupied by one person.

At the beginning of January, the first figures on the number of accidents last year became known. The German Police Union (DPolG) then appealed to Federal Transport Minister Andreas Scheuer (CSU) to review the legal situation. The union demanded a test certificate as a prerequisite for users as well as a helmet requirement.
The provider association “Platform Shared Mobility” contradicted it on request: “The introduction of a helmet requirement would reduce the use of e-scooters extremely, therefore we are calling for 30 kms for cars in city centers and a significant improvement in the infrastructure to protect users of micromobility” said spokesman Christoph Egels. The member companies encouraged users to voluntarily wear a helmet.
The companies anticipate a further increase in demand: e-scooters are no longer just a phenomenon in big cities. They also want to be active in the outskirts of cities, where there are gaps in local public transport. The corona pandemic initially caused demand to collapse, but then there was a positive trend.

Aid organization: More people worldwide than ever on the run