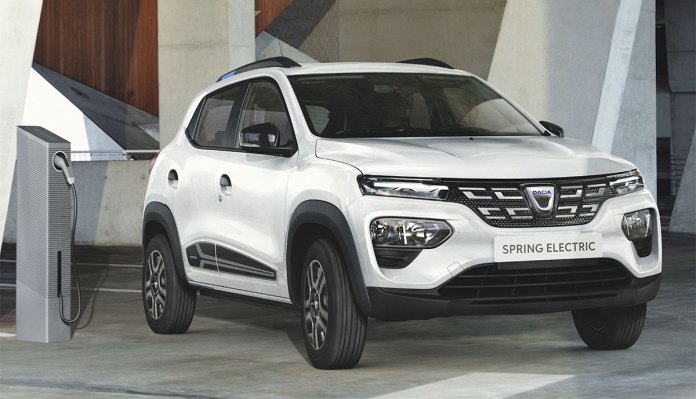 Renault is launching its small electric SUV K-ZE, which is already available in China, in Europe with its cheap subsidiary Dacia. The Romanian manufacturer offers the model with design adjustments and the modifications necessary for road approval under the name Spring Electric. The price for Germany has now been set.

The Spring Electric is the first Dacia electric car to be offered in Germany from 21,790 euros. This price was recently published on the provider’s website, where there was also talk of a market launch in September of this year. The information has since been removed – why is not known.

The Spring Electric should therefore cost less than Renault’s previous entry-level model: the French are offering their German customers the Twingo Electric mini-car from 23,790 euros. The slightly larger small car ZOE currently costs from 29,990 euros. Other brands have cheaper electric cars, such as the e.GO Life (17,900 euros) and the Seat Mii electric (20,650 euros), but these models are not directly comparable to the more spacious SUV Spring Electric.

In Germany, for the time being, no one will have to pay the 21,790 euros officially called up as a new price for the Spring Electric: the Renault Group is participating in the “Umweltbonus” funding jointly financed by the federal government and industry, which for electric vehicles at a net list price of less than 40,000 euros a total of 9,000 euros is – 6000 euros subsidy comes from the state, the manufacturer gives 3000 euros net discount on purchase. It is expected that Dacia will also grant the e-car premium.

A battery with 27.4 kWh storage capacity is built into the Spring Electric, which enables 230 kilometers with one charge in accordance with the WLTP standard. The electric motor has an output of 33 kW (45 PS) for a top speed of 125 km / h, there is no information about acceleration yet. The combined power consumption is estimated at 13.9 kWh / 100 km. If the Spring Electric’s battery is empty, it can be filled to 80 percent of its capacity in 56 minutes using an optional CCS fast charging system. The regular loading times remain to be seen.

The trunk of the 3.73 meter long, 1.62 meter wide and 1.49 meter high Spring Electric holds 290 liters, with the backrest folded down, the capacity increases to 600 liters. A 3.5-inch central display for all important driving information is available in the cockpit between the two round instruments. Voice recognition via Google or Apple can be activated by pressing a button on the multifunction steering wheel. An extra-cost, centrally located multimedia system with a 7-inch screen includes navigation, DAB radio, Bluetooth functionality and a USB port and is compatible with Google Play and Apple Carplay.

Dacia also offers the Spring Electric in other European countries, sometimes at significantly lower prices than in Germany. Before the first vehicles are handed over to customers in September, the electric SUV will initially be delivered to car sharing companies from this spring.